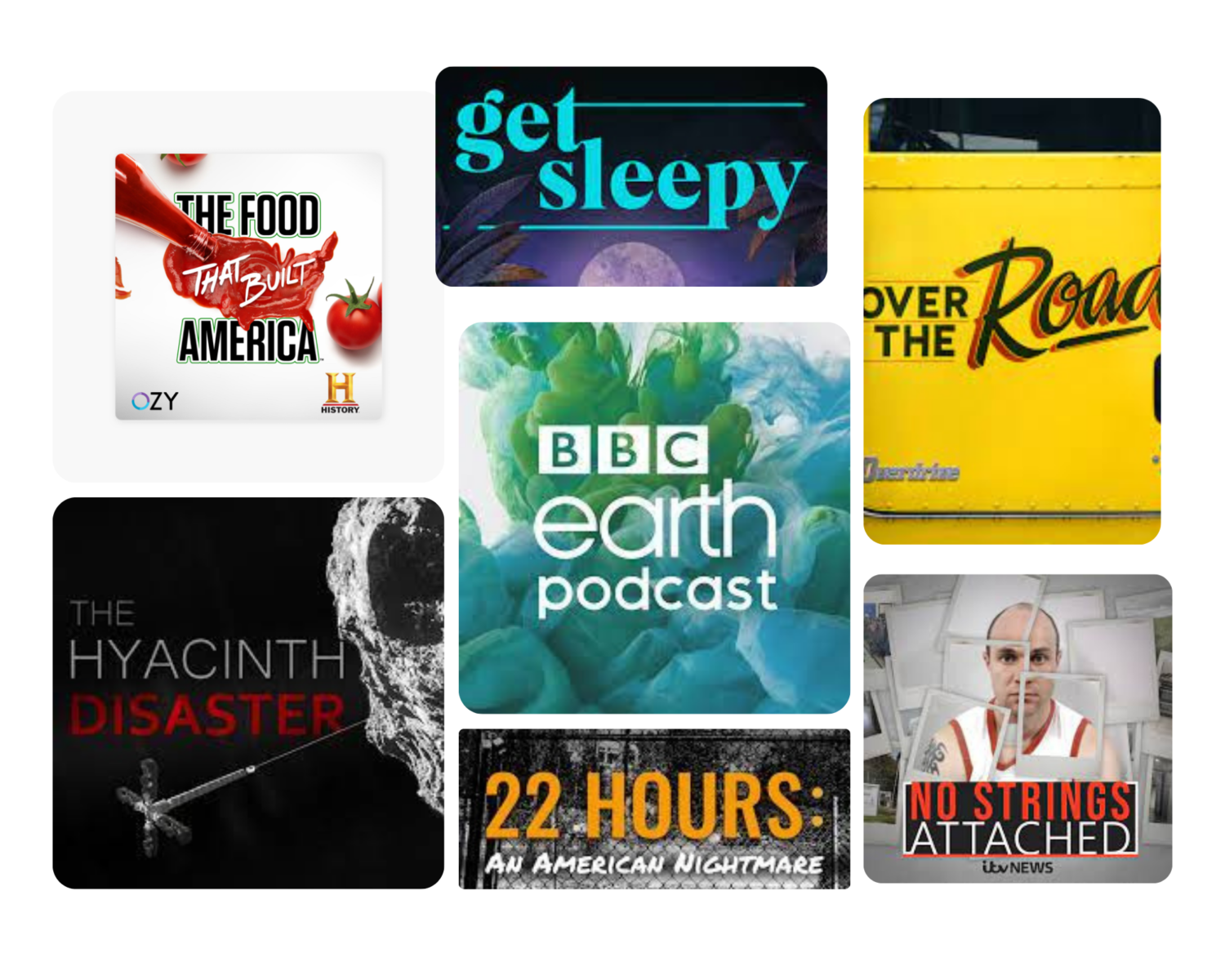 Check out some of the best podcasts this week, curated by KCSU’s podcast director. As always, no spoilers!

“Over the Road” from Overdrive Magazine and PRX’s Radiotopia is an eight-part series about long-haul trucking and the people who make it happen. Host “Long Haul Paul” Marhoefer opens the curtains for us to peer into the inner workings of what goes into getting everything we want in our stores and on our doorsteps.

It’s not really a spoiler to say it isn’t magic. Personally, I was amazed by giant long trucks when I was a kid but really haven’t thought of them much since. The same probably goes for a lot of people who, like myself, take them for granted.

This show is an honest, educational look at a community hidden in plain sight with grade-A storytelling. Marhoefer’s voice is gravelly and comforting. I really like how inclusive the short series podcast is. We hear from women and people of color as well as people who aren’t truckers but who depend on the industry, like waitresses.

Apple Podcasts has 4.7 out of 5 stars and 1,100 ratings. Episodes should be listened to in order and are about 43 minutes long. The music throughout the show is great, and a lot of the episodes feature songs that are by Marhoefer himself. I would have never guessed I would enjoy a podcast about trucking, and if you think the same, I insist you give it a try.

No trigger warnings for this one.

Similar Pods: “Ear Hustle,” “The Moth” and “The Memory Palace”

“BBC Earth Podcast” is nature like only BBC Earth can do it. Who doesn’t love to kick back with tea and Planet Earth? Now you can experience that same feeling of amazement on the go with some of the best storytelling and audio production out there.

The podcast started in 2018 and has just finished up its fourth season, it presents close-up encounters and surprising insights into not only nature but the science and human condition surrounding it. Creators pay meticulous attention to the immersive soundscape with every volume and direction of sound added to put the listener inside the narrative.

Apple Podcasts has 5/5 stars, 203 ratings, and 20 written reviews. Solo host Emily Knight guides the show through a set of related stories each week on Mondays with topics ranging from the bottoms of oceans to the peaks of the highest mountains in the world. The show currently has 35 episodes, all about 26 minutes in length.

My favorite episodes have been “Can anything last forever?” and “Finding what doesn’t want to be found.” Owltail’s most popular episodes are “The planet where it rains diamonds” and “Looking Up.” No word on when the next season can be expected, but with no final goodbye it seems that another is coming.

The music is so great that I’m going to refer to it as a score, and commercials are average in quantity. Perfect for sleep or work. I can’t recommend it enough.

It’s April 5, 2015, and Vicky Cilliers, an army captain, loving wife and mother, goes to jump out of an airplane like she has so many times before. The experienced freefall instructor has completed 2,600 jumps safely, but on this Easter Sunday, her parachutes have been tampered with, causing them to fail. Will she survive the 4,000-foot fall? What looks like an accident leads detectives to uncover a story of infidelity, debt and manipulation when Cillers’ picture-perfect life turns out to be not what it seems.

From iTV News and hosted by Rob Murphy, the 2020 podcast “No Strings Attached” has 4.7 stars from Apple Podcast, 15 ratings and only two written reviews. The hidden gem is completed with eight episodes total that average about 31 minutes in length. Each contains interviews from those involved with the case as well as insights into how the British legal system differs from the American system. Extra video content can be found on their website.

No commercials, and minimal music. Trigger warnings for abuse and violence.

Similar podcasts: “Conning the Con,” “The Sure Thing” and “Culpable”

“22 Hours: An American Nightmare” used to be its own podcast. Now “22 Hours” has become the first season in a new podcast: “WTOP’s American Nightmare Series” (pronounced W-T-O-P; I really don’t know why), which covers true crime stories in the Washington D.C. region.

The first season, “22 Hours: An American Nightmare,” hosted by Megan Cloherty and Jack Moore won second place in Podcast of the Year awards from The Associated Press and topped Apple Podcasts charts for a number of weeks. It covers the horrific 2015 crimes against the Savopoulos family and their housekeeper, Vera Figueroa. The second season, “Murder in a Safe Place,” looks into the sexual assault and homicide of 50-year-old nurse Sherry Crandell inside her office in a DC hospital.

I am disappointed season one was lumped in with season two. I really think they could and would have been better off as separate shows, although joining them makes me suspect we can expect a third season.

The first season is truly a true crime classic and the reason I am recommending the show. I used to only listen to episodic true crime podcasts, and this was my gateway to series binges. The story is unforgettable because it looks at an attack on a family in their home where they should be safe. The pod recounts everything from the crime itself to the investigation and eventual court theatrics. I was impressed with how the timeline was revealed and well-researched.

It’s told from the point of view of investigators but also includes what the public knows at each point. Season two had a crazy amount of commercials (that’s coming from someone who understands why podcasts have commercials) and could have easily fit into two or three episodes.

For those who listen and need more information, the website has a ton of bonus content such as maps, court documents, photos and a way to contact the creators of the pod. True Crime Garage also has a two-parter on the case. The voices of the hosts are classic reporter, which some people don’t like but I didn’t find to be sensationalizing.

Trigger warnings for crimes against children, torture and murder.

“The Food That Built America”

This 2021 history podcast from Ozy and the History Channel tells surprisingly entertaining stories about what it took to create some of the most famous food industry giants you thought you knew, like KFC, Hershey and a dozen or so more.

Ozy has done some other notable podcasts including “Flashback,” “Future of X” and “Confidential.” Fans of the History channel might be privy to the fact that it also has a TV show by the same name with the same episode topics.

The background stories of how some of our favorite snacks were developed show an unexpected human side to the people we’ve come to know as tycoons. There’s everything you can think of in these episodes: ruthless business tactics, aspiring competition, ingenuity, innovation and more.

One of my favorite things about the show is how it’s told. Each episode is told with the help of a knowledgeable host, food historians and professors. It’s all blended together for a seamless story.

Apple Podcasts has 4.5 stars and 427 ratings. Some don’t like solo host Sean Braswell, but I’m a big fan of his voice. So far there are 10 episodes, and while I hope there will be more, this appears to be a limited series. The last episode came out in April. When it was airing, new episodes were released once a week on Thursdays and were on average 26 minutes long.

Similar Pods: “THE HISTORY OF FOOD,” “The Fantastic History Of Food” and “Gastropod”

This sleep meditation podcast is filled with stories great for both adults and children. It combines various narrators and relaxing stories to distract you from a wandering mind, helping you ease into a full night’s rest.

I really like how a lot of the narrators return to do multiple episodes and how the stories have so much variety in them. You really never know what the next one is going to be about, but you can rest assured (pun intended) it’ll be as calming as the last. It’s perfect for those who like falling asleep to a story but can never figure out where in the audiobook you fell asleep at.

I’m not sure about all pod players, but Pocket Casts has the option to set the sleep timer to end at the end of the episode. I often listen to the same episode a few nights in a row because after falling asleep I don’t remember them the next day. Even the ads are relaxing and in the same tone as the podcast, so you aren’t startled when they come on.

Apple Podcasts has 4.6 stars and 5,000 ratings. The podcast did seem to have gone paid only for a little while, but it is currently free. Total there 62 free episodes with new full-length ones releasing every Monday and Wednesday. On average they are about 43 minutes long with the short series of preview episodes from the paid period upsetting the mean.

The most popular episodes according to Owltail are “The Kingdom of the Sun” and “The Island Fox.” Personally, I love the stories where it’s told from a second-person point of view as if you’re in the story and doing what’s being described. For some reason, it gives me a little more to imagine and think about.

My favorites so far have been “The Night Bus to Bengaluru” and “Touring Nova Scotia.” I find the history-based and guided mediation episodes to be really enjoyable as well.

No trigger warnings for this one.

Similar Pods: “Tides of History,” “Nothing Much Happens” and “Phoebe Reads a Mystery”

“This Thing of Darkness”

“This Thing of Darkness,” a tragic, suspenseful audio drama from BBC Scotland, originally aired on BBC Radio 4 and is hands down one of the best fictional podcasts I’ve heard. The seven-part story starts with the murder of Jamie, a 19-year-old personal trainer and social media influencer, and follows his family as they try to find out who did it. It’s told from the point of view of a forensic psychiatrist, Dr. Alex Bridges, hired by the defense of Jamie’s father, David, who’s been accused of his murder and is awaiting trial.

With Dr. Bridges as our guide and narrator, we listen in as she interviews David about his life and what happened to Jamie as well as the group inmate therapy sessions he participates in. While David and his daughter are adamant about his innocence, the series keeps you questioning whether the truth of Jamie’s murder will be revealed.

This podcast has everything: a great plot full of family secrets, excellent sound production and solid voice acting. It doesn’t just feature really well-done character development; it’s the definition of it. In the group sessions throughout the show, we meet complicated characters and walk with them as they come to terms with their crimes, regret and grief.

Three of the main characters and family members also experience major changes. The show focuses, through the work of Dr. Bridges, on the psychological aspects and effects murder has on those involved, with a professional consultant, Gwen Adshead, to fact-check the series.

4.9 stars out of 5 on Apple Podcasts with 50 ratings and only seven written reviews.

Marie Tanksley, the podcast director, can be reached at podcast@kcsufm.com. 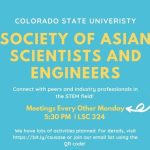 Society of Asian Scientists and Engineers