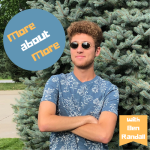 My name is Benjamin Randall, and I am a former high school podcaster from the small town of Gretna, Nebraska. I began this podcast, More About More, during my senior year of high school as a sort of “branching-out” project for an English composition class. Incredibly, it became an instant hit at my high school and surrounding town, which prompted me to embark on a nineteen (yes, not twenty) episode season! My topics varied from societal issues to daily motivation, but most prominently covered music, where my hit series was a “Music Mondays” type of weekly routine. These episodes consisted of an analysis of a fan-submitted band or musical artist, small excerpts, and some concluding remarks about the band in reference to life. I am uploading my first season to KCSU, and plan on launching a similar season throughout the following semester.

Throughout my podcast, I encourage my listeners to keep an open mind; I met a lot of bands I would never have listened to before, and am eternally grateful for the musical diversity that I’ve been opened up to.