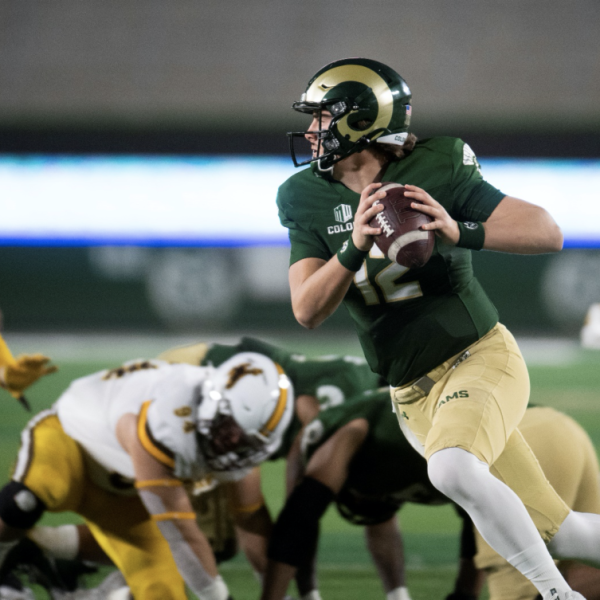 Patrick O’Brien on the move. November 5, 2020. (Photograph by Bethany Baker of the Coloradan)

Fort Collins, Colo. – A dominating performance by the Rams lead to a 34 – 24 victory. Colorado State University gets their first win against Wyoming since 2015. More importantly, the Bronze Boot is back in Fort Collins.

CSU’s Defense came through big with key plays in the first quarter. The Ram’s defense had a pick-six, forced a fumble, and stopped the Cowboys on a key fourth-down play. The Ram’s were able to capitalize off Wyoming mistakes leading to 17 – 0 lead until midway through the second quarter.

The Cowboys, in the fourth quarter, finally responded with a 8 play, 56 yard drive ending in a Wyoming Touchdown (Williams 3 yard rushing score). The lead was cut down to 31 – 21. CSU later put together a grueling 11 play drive, taking 5:32 off clock, ending in a 48-yard field goal from Freshman Robert Liss. The game would end 34 – 24.

The offense moved the ball much better than last week. At the end of the first half. Quarterback Patrick O’Brien lead three drives with result of 1 touchdown, 1 field goal and 1 field goal missed. The offense seemed to only struggle after key penalties stalled out drives. O’Brien finished the game with 69% passing, 18 for 26 for 255 yards and two touchdowns.

In case you were wondering—that Trey McBride is pretty good tight end. He kead the team with two touchdowns. His play has earned him to be one of the best Tight Ends in the Mountain West Conference—if not the best. In 2019, McBRIDE lead the Mountain West Conference in the most catches and receptions for tight end. McBRIDE finished the game with 5 catches for 90 yards and two touchdowns.

Penalties were a struggle for both teams. For instance, CSU had a big punt-return by Dante Wright called back for a running into-the-kicker call. Wyoming had some big personal foul calls hurting their team.

The Rams lead the matchup all-time with 59 to 48 wins.  CSU also leads in Conference championship—15 to Wyoming’s 14.