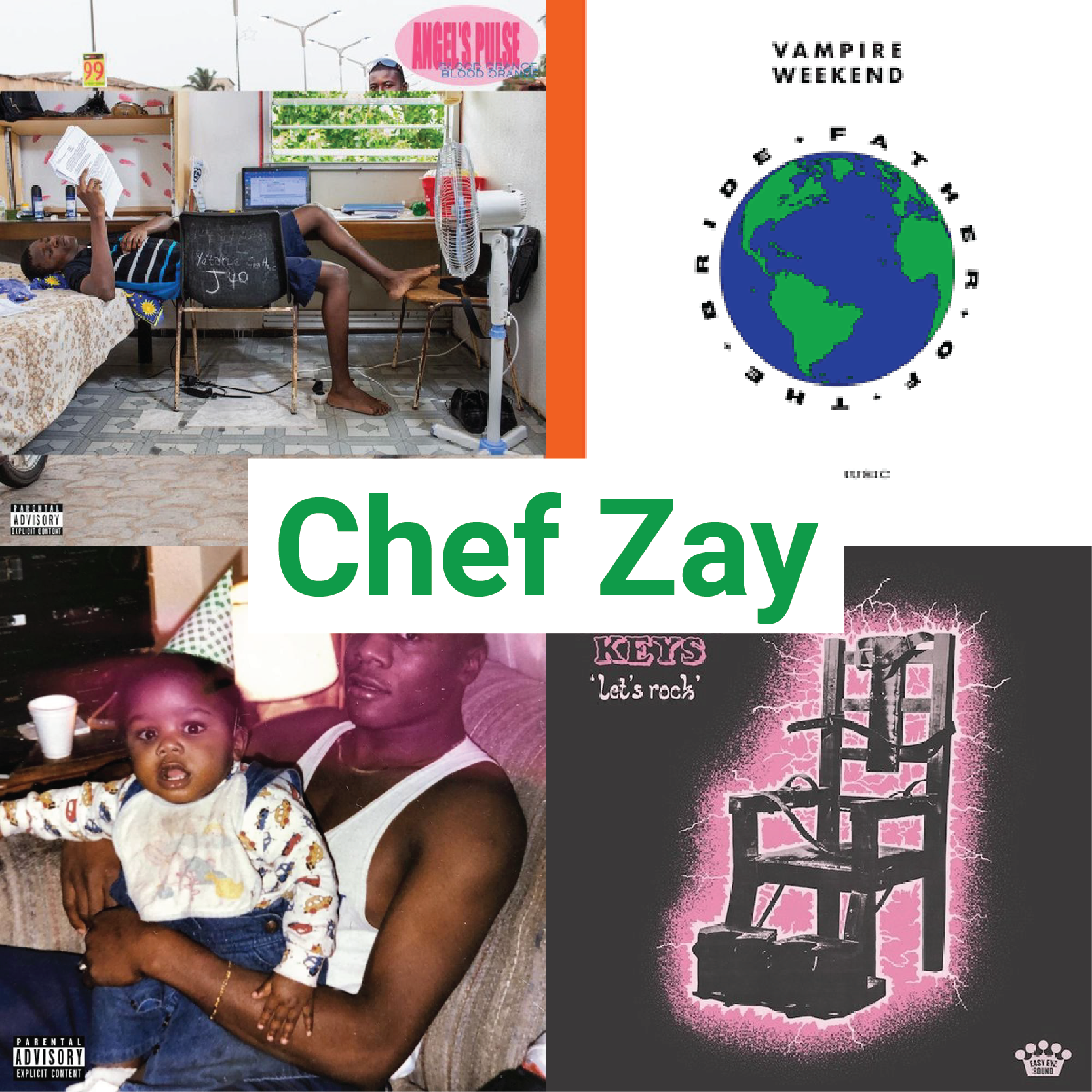 When I say this album changed a genre, it’s not an overstatement. Devonté Hynes has been composing and producing music for over a decade and has reached, in my opinion, his pinnacle as a creative in the industry with this mixtape. With topics in the mixtape involving suicide, depression, and anxiety Hynes’ transparency with the listener is jaw-dropping at times. Hynes creates an invitational space for the listener to explore their current environment and how they function within it. By far, this album has brought out a new emotional thematic that compliments his use of piano and strings with bass-thumping rhythms that will be adopted in future artist’s work in the genre for years to follow. From the beginning to the end, this cohesive piece of art will keep your ears perked and your brain in thought. Highlights from the mixtape are: “I Wanna C U,” “Good For You,” “Dark & Handsome,” “Benzo,” “Seven Hours Part 1” and “Today.”

It’s a banger. From the first song on the album, the cadence of Jonathan Kirk is set and maintained throughout the hooks, verses and story-telling for the full length of the album. Kirk has songs on the album that represent his deeply held family values, his partying values, his polyamorous values and how he talented he is when it comes to making popular songs that can even be endorsed by Dwayne the Rock Johnson. Kirk has compared himself to other giants in the genre like Drake, Kanye and Lil Wayne, which may be a tad early, but at this rate may be in contention with for the rap title for years to come. Highlights from the album are: “Intro,” “Bop,” “Vibez,” “Raw S***” and “Pop Star.”

What more can be said about this band out of Akron? After their five-year hiatus from “Turn Blue” it was a crabs shoot for fans on what to expect on this project. The release of singles like “Go” and “Eagle Birds” left fans (and myself) in the dark about what the final product would sound like. Arguably one of their best albums, the group found a balance in keeping to their roots with the garage 2-piece sound with their newfound electronic influences. The album challenged what rock’n’roll means and explored some of the most inner-personal lyrics Auerbach has written in his tenure with the Black Keys. Overall, this album has a song to cry to, to drive with the windows down through Route 66, to reminisce about past relationships and culminates with songs to headbang until you get whiplash. This is my album of the year. Highlights from the album are: “Sit Around and Miss You,” “Walk Across the Water,” “Shine a Little Light,” “Tell Me Lies,” “Go” and “Fire Walk With Me.”

Vampire Weekend – The Father of the Bride

Vampire Weekend early in the year announced their return to the music industry. This album has so many heartfelt songs, it’s timing was impeccable to be considered for the album of the summer. This album had a heavy influence of piano which was a change for an upbeat pop band, but still showed homage to its original sound with songs like “This Life” and “Harmony Hall.” Overall, the band delivered an album that was better than expected and has a song for casual fans and die-hards. Highlights are: “We Belong Together,” “Sunflower,” “How Long,” and “This Life.”

So Much Fun – Young Thug

Like the title suggests, this album Thugger (Jeffery Williams) has an abundant amount of features that each add a new layer to the album that’s theme is predominantly club-bangers. Thugger was able to recruit his frequent collab partner in Gunna, Quavo, Travis Scott, Future, Lil Baby, J. Cole and a couple of others. I have had discussions with lots of people about where the line is drawn in hip-hop and rap and to me, this album is clearly hip-hop. While there won’t be any lyrics that change your life or make you spend time in deep thought, there’s plenty of options to include in gym workout playlists. Highlights are: “Hot,” “Bad Bad Bad,” “Sup Mate” and “The London.”

The Art of Gore – Borgore

I’ve only been blown away by a handful of electronic albums in my life and this album showed a little bit more of the DJ’s versatility than what he’s exhibited in the past. I haven’t enjoyed a single collection of his songs like this but in my opinion, this was the best electronic album that was released this year (I’m sorry Illenium fans). This album showcased a lot of spoken-words (some (not all) actually had a meaning behind it? Who’d of guessed that one) mixed with his face-melting bass drops that Borgore fans have accustomed themselves to over the years. Now don’t get my twisted, if you already have negative connotations about electronic music, this album isn’t going to help break any walls down for you – yet, it still has a bountiful amount of headbanging music.

Cuz I Love You – Lizzo

It’s hard not to love Lizzo. Whether it’s her persona, her voice or the tear-jerking music this woman creates she’s sure to cut right into your soul with her third studio album. I was just like the rest of America, unbeknownst to this queen until I first saw her performance on the BET Awards in June. From there, I was hooked on this album that had slipped through the cracks for me. Her vocal range on this album is impossible to match combined with some of the catchiest lyrics creates dynamic tracks for the listener. If you’re in need of some motivation, getting over a former lover or trying to dance the night away, this album has your name written all over it. Highlights are: “Juice,” “Cuz I Love You,” “Truth Hurts,” and “Tempo.”

Chaz Bear has been busy this year. Releasing this album at the beginning of the year, Bear before Halloween happened released another mixtape Soul Trash that combined more alternative music with Bears’ electronic signature sound. Outer Peace takes fans into Bear’s personal (and very groovy) space. Only 10 tracks long, it’s a quick 31-minute listen but is for certain aimed to give you nostalgic Daft Punk vibes. Bear’s distorted voice compliments the choppy electronic rhythm in an intoxicating way that hooks onto your ears. Highlights are: “Freelance”, “Ordinary Pleasure,” “Baby Drive It Down,” and “Fading.”

When I Get Home – Solange

Solange Knowles has had herself a memorable 2019. Performing at Camp Flog Gnaw and pulling out of Coachella, 2019 has been volatile. Still, Knowle’s musical talent is undeniable for any R&B fan. Knowles finds a nice equilibrium of up and down tempo throughout the album to exemplify that both Knowles sisters are equally capable of producing memorable lyrics and make it look flawless at the same time. This album had lots of outside contributions but some of the most interesting ones to me were Tyler, the Creator, Gucci Mane and Playboi Carti. Solange puts the album together in such a cohesive way that songs in the album tend to bleed into one another which just makes it all even that much smoother. Highlights are: “Binz,” “Almeda,” “Stay Flo,” “Time (Is)” and “Dreams.”

This album comes at the halt of the Alabama Shakes, Howard’s other Grammy-winning rock group that released an album in 2015. Howard dives into family, inner-personal and sexuality struggles on this project. It’s hard to put your thumb on this album which is what I believe is its strong point. Bouncing between bizarre trumpets and drums to the xylophone and electric guitar, Howard displays all of her musical talents on this album. Revealing so much into her upbringing, this album was an interesting peek behind the curtain to who Howard truly is. Highlights are: “He Loves Me,” “Stay High,” “Goat Head,” and “History Repeats.”