On October 26th, I attended a show at the Aggie the likes of which I have never previously experienced

The first act, Maryland’s Stacked Like Pancakes, started off the night with a riotously fun energy that perfectly set the stage for Reel Big Fish’s main set. A typical ska band, full of obscenity and a killer horn section, Stacked Like Pancakes did not bring anything new to the table. But they created an appropriately upbeat and lively atmosphere that definitely got the crowd dancing and  jumping along.

The second act is where it got weird. Like very very weird. Onto the stage walks the five piece band known as PPL MVR, of which three of the members are dressed head t 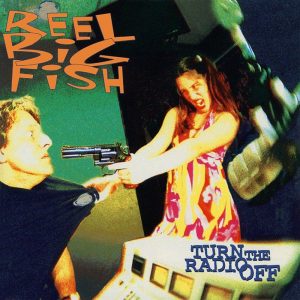 o toe in yeti costumes. Lead singer, Snowball, starts his set by ominously warning the audience to, “prepare for 30 minutes of confusion.” And boy oh boy, does PPL MVR deliver on this promise. The set was filled with hard rock songs, auto-tune, primitive grunting, and Snowball himself coming into the audience to swing his (fake) blood tipped guitar at audience members. All of this accompanied by strange and random images projected onto a screen that included such things as troops marching, people eating meat ice cream cones, and some sort of caterpillar looking bug crawling back into its egg. PPL MVR’s performance is certainly one that is not going to leave my mind for a long time.

Finally, it was Reel Big Fish’s turn to take the stage. With beers in hand, and front man Aaron Barrett clad in the tackiest of Hawaiian shirts, the audience knew we were in for some classic, energetic and rambunctious ska. This tour is in celebration of the 20th anniversary of the band’s gold certified album ‘Turn The Radio Off.’ In commemoration, the band played the entire album in order, however, leaving fan favorite, ‘Beer,’ until the end. Reel Big Fish’s performance was full of energy and life and also had a sense of delightful authentic sense of humor, as is expected of a ska/punk band. Constantly making jokes and laughing with and at each other, the band never took themselves too seriously. And this sense of laid-back community was reflected in the audience as well. The place was completely packed with people and the crowd was wild from beginning to end, with the mosh/skanking pit dominating the entire bottom level of the Aggie. But as is typical in the ska community, everyone was still respectful. Helping each other into or out of the pit, and holding up lost shoes and shirts in the middle of the fray.

Overall, the entire night’s experience was unprecedented levels of fun. The openers were fantastic and a little wacky, and Reel Big Fish completely delivered exactly what the audience wanted. If you’ve never been to a ska show I highly recommend it, and definitely try to catch a Reel Big Fish show next time they’re in town.