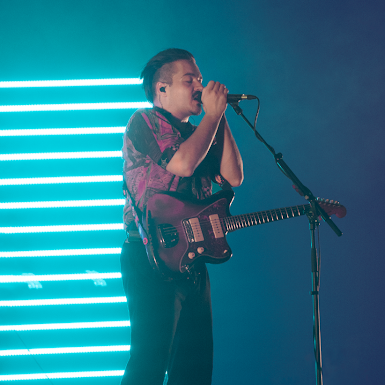 Going to Denver on December 19 was surreal. I’ve covered two shows at smaller local venues this year, but nothing of this scale. Mission Ballroom is the largest place I’ve gotten a press pass for. Besides that, anticipation for the upcoming show had built for nearly two years.

Milky Chance had to postpone its tour three times. I heard talk in line about people who first bought tickets in 2019. The promise they’d held onto, marked by barcodes and paper tickets, was finally being fulfilled. Many fans also traveled from out of state to be here. Just before doors opened, the bands’ videographer began documenting the crowd. Security and staff led chants of “Are you ready?” as he captured our restless excitement. Once inside, I discovered that was just a small portion of what the production team planned to document.

Scattered throughout the floor was a sizable collection of high-end recording equipment. I felt miniscule in comparison with my single camera and two lenses. I could hardly register that I was allowed to work amidst it all. The time until Giant Rooks was set to play seemed infinite, though it was an hour at most. In the preceding weeks, I had their debut album, “Rookery,” on repeat. My listening history, however, began much earlier. Since 2019 I’ve listened to the station DLF Nova to help with learning German. Giant Rooks  are often on the radio in their home country. I never imagined we would cross paths unless I somehow made my way to Europe.

I did a double take when I saw they’d be playing with Milky Chance. This was their first time performing in North America, and I would be one of almost 4,000 to be at their first Denver show as well. They kicked it off with “Heat Up,” one of the singles from “Rookery.”

The first lyrics sung into the cavernous space and over the audience were, “Here’s to our feelings and our yearning.” No other words could have so perfectly set the tone for the evening.

Giant Rooks was instantly captivating. They sounded better live than on any recording I’d previously listened to.

The band’s music, which was already easy to get lost in, took on an entire life of its own. I don’t know if I can recall any other group that’s had two sets of drums or a lead vocalist who is also a main percussionist. Frederik Rabe, Jonathan Wischniowski, Finn Thomas, Finn Schwieters and Luca Göttner have produced the kind of music that nearly supercedes description. It is as much about eliciting emotion through instrumentation as lyricism.

When asked by Rabe if the audience knew of Giant Rooks prior to this concert, just a few dozen people raised their hands. This changed within minutes. My gaze never strayed from the stage, but I could sense that the crowd around me was equally as enchanted.

My earliest memory of Milky Chance comes from when I was barely in high school. Now I’m about the same age as they were when their careers took off. I was strangely nostalgic leading up to the show because of this. I hoped I could go back to a less complicated time when I was a teenager with trivial preoccupations. Not only was I able to do so, but I also felt like myself for the first time in a long while.

Their first song connected to me on a subconscious level. The rhythm of its bassline seemed to mimic my heart beating wildly in my chest. My body realized the significance of the moment before my brain could fully process it. After “Fallen,” the band continued with two songs from its latest pre-pandemic release. Since Milky Chance didn’t tour for “Mind the Moon” until now, it was featured heavily in their setlist and production design.

As the night progressed, it became clear that the audience was clamoring for one song in particular: “Colorado.”  Though it was a staple on their setlist, Milky Chance might as well have saved it just for us. Those two minutes and fifty four seconds were the cathartic release the rest of the evening had built up to. Denver was the last night of tour. While it was in a literal sense the end of an era, it didn’t come with the dopamine crash I would’ve expected. More than anything, I was rejuvenated.

Both bands are taking a brief vacation before going back to performing. Five weeks of touring all over North America must be exhausting, after all. Milky Chance is next scheduled to play on January 17. Giant Rooks will return on March 2 and has dates in the United States starting May 11.

Additional dates and information are available on their websites: Milky Chance and Giant Rooks.