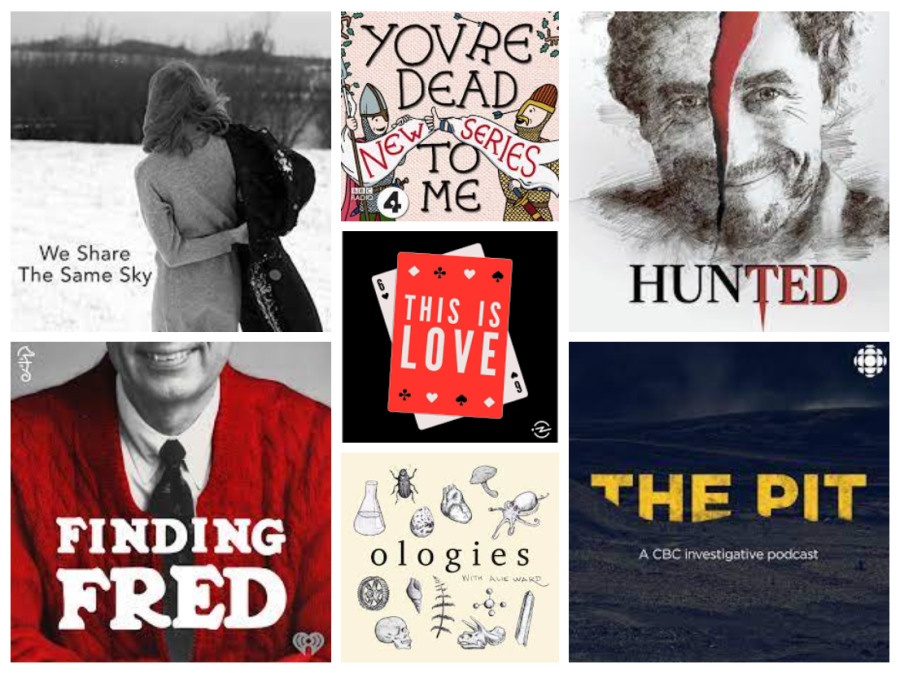 Check out some of the best podcasts this week, curated by KCSU’s podcast director. As always, no spoilers!

In 2015, Saskatchewan police found Canadian woman Sheree Fertuck’s abandoned semi-truck at the town’s gravel pit with her keys, coat and phone inside. She’s never been found, but police ultimately believe the 51-year-old is dead.

“The Pit” is a true-crime podcast miniseries by CBC (that’s the Canadian Broadcasting Corporation) that follows the case from the missing report to trial. It discusses the case, theories with the family, law enforcement interviews and possible suspects.

CBC’s website has a ton of bonus information like recordings of live Q&A’s, features of the team behind the show, and it even has a 360-degree interactive video of the last known whereabouts of Sheree.

The series has only 58 ratings on iTunes, which shocked me, but an average of 4.5 stars. It started in 2019 and has 12 episodes with a trailer. Updated episodes and recent trial coverage was added just this month.

All of the episodes are about 35 minutes long and should be listened to in order. Hosts Victoria Dinh and Alicia Bridges both live and work in Saskatchewan.

Voices and volume levels were fine.

Trigger warning for a missing person and domestic violence.

Similar Podcasts: “Suspicion,” “What happened to Holly Bartlett,” “Your Own Backyard”

“We Share the Same Night Sky” is a masterpiece podcast produced for the USC Shoah Foundation, and it will rip the heartstrings completely out of your chest as it tells a family’s devastating experience in one of humanity’s greatest crimes: the Holocaust. The narrative follows the story of a survivor through her great-granddaughter, Rachael Cerrotti, as she tries for over a decade to get to know the family matriarch the best way she knows how — by following in her footsteps.

The immersive, seven-part series made me cry and cheer but all along reminded me of the theme the title so brilliantly suggests: We’re all connected. It details the cruelty of some but also the intense compassion of others.

The show’s Apple Podcasts has 5 stars, 1,187 ratings and 155 written reviews. It was listed as one of the best podcasts of 2019, by HuffPost, and acclaimed by Apple Podcasts and Vulture Magazine. A number of other popular podcasts, including “Kind World” and “Israel Story,” featured it, and it is used in classrooms around the world.

Each episode is about 32 minutes long, with the last one coming out just in November of last year. It has no commercials. It’s beautifully scripted with lovely voice and music and has the obvious trigger warnings for war and violence. It’s one of those podcasts that benefits from listening twice not because it doesn’t tell the story well but so that you can really take it all in instead of being absorbed by the shock of the story.

The website includes the letters mentioned in the show as well as pictures, the book which is out now and so much more. I recommend the book, but be careful if you’re looking for it as opposed to the podcast because they have a similar name.

I’m not sure I understood living memory before this, but this pod is the personal first-person story of three generations weaved together by history and emotion told through letters, journal entries, and survivor accounts.

“You’re Dead to Me” is a historical podcast from the BBC with a format I haven’t seen before. Host Greg Jenner brings together one historian and one comedian to learn about a topic.

While this keeps the show fresh, there are episodes that are better than others based on the comedians. Sometimes they can be not funny and interrupt, often taking away from the educational focus of the show; however, I didn’t find it intolerable. In fact, I added the pod to my “education you love” playlist because it gives the listener a break from some of the more boring superscripted educational shows that are really popular.

Apple Podcasts has 4.7 average stars and 674 ratings. New episodes come out weekly, mostly on Fridays (occasionally Thursdays) with 81 episodes in the backlog, and all of them are on average about 43 minutes long. OwlTail has the top three episodes as “Eleanor of Aquitaine,” “The Witch Craze” and “The History of Chocolate.” These are all great, but I really loved “The Egyptian Pyramids” and “Mary Shelley.”

Similar Pods: “The Bomb,” “Real Dictators,” “All The People You Should Know,” “Arthole”

I avoided “Finding Fred” for a long time because the gray cover art made me think it was going to try to expose some deep dark secret about Fred Rogers. However, that is nowhere near the case, and this podcast actually turned out to be a contender for podcast of the year for me.

Who didn’t love “Mr. Roger’s Neighborhood” as a kid? And who would have thought there would be even more to learn from him as an adult? That’s exactly what this podcast sets out to show.

Tackling every aspect of the show from its conception and production to the ideals of Rogers and his persistence to teach children how to confront their feelings in an ever-changing and dangerous world, the podcast is comprehensive coverage of Fred Rogers.

Apple Podcasts has 3,800 ratings with an average of 4.5 stars. Solo host Carvell Wallace, best-selling author and amazing storyteller, covers Rogers in 10 episodes, all about 31 minutes long.

My favorite episode is so hard to pick for this one because they’re all so good and necessary, but I suppose I’d have to pick “I like you as you are.” OwlTail has the highest-ranked as 1: A Genius of Empathy but it’s pretty common for the first episode of a series to be the most listened to.

Script, music and voice are all pristine.

I don’t think Ted Bundy needs an introduction. In a quick google search for the most well-known serial killers of all time, he showed up on every list. Just in case you get them mixed up as I do, Bundy killed what is thought to be 30 women and girls across six states.

“Hunted: Inside Ted Bundy’s Trail of Terror” was made by the Fort Collins Coloradoan newspaper in 2019 and concentrates on Bundy’s killing spree in Colorado and his three victims here: Caryn Campbell, Julie Cunningham and Denise Oliverson. Living in Colorado may make me a little biased, but I really enjoyed this deep dive into a section of the case.

If you don’t know Bundy’s story very well, I wouldn’t start with this one because it concentrates on only part of his spree. Parcasts “Serial Killers” and “Morbid” both have great coverage of the case.

Apple Podcasts has 4 stars, 212 ratings and 18 customer reviews. There are three main episodes and a trailer, and they’re about 23 minutes apiece. Pretty short, but the recaps aren’t too long either. The narrator’s voice is a little monotonous and scripted, but overall I really liked it.

Similar Podcasts: “Last Seen,” “Atlanta Monster,” “The Clearing,” “Patty Has a Gun: The Life and Crimes of Patricia Hearst”

I usually try to concentrate and review lesser-known podcasts, but I also wanted to start sharing my thoughts on highly rated staples of the podcasting world. “Ologies with Alie Ward,” of course, falls into the second category, as it has for a few months now held its place as the second highest-ranked science podcast on Apple Podcasts.

This isn’t without reason as anyone who has heard the show knows how charming solo host Alie Ward is and how informed her show has always been. Her mantra “Ask smart people stupid questions” pretty much explains the format and message of the show.

In a pretty consistent format, Ward uses some of her own questions as well as many questions from her patrons to interview an extremely educated person of a particular field of study (or ology). Apple Podcasts has almost 11.5K reviews with a solid 5-star average, and only 4% of reviews not being five stars. I know I say it all the time, but that’s one of the smallest margins of poor ratings I’ve ever seen.

New episodes come out weekly with 230 in the archives. On average they’re about an hour long and usually come out Fridays, but the schedule has gotten a bit off, probably due to the pandemic.

OwlTail has the top episodes as “Personality Psychology (PERSONALITIES) with Simine Vazire” and “Coronasode: Virology (COVID-19) with Dr. Shannon Bennett & Mike Natter,” but some of my favorites have been “Condorology (CONDORS & VULTURES) with Jonathan C. Hall” and “Osteology (SKELETONS/BODY FARMS) with Daniel Wescott.”

The script is polished and well-edited. I absolutely adore the intro/outro mix, and the voice is consistent and balanced with no one sounding like they’re on the phone. The rest of the podcast community and I can’t recommend this enough!

“This is Love” is done by the creators of “Criminal,” and similar to that show tries to focus on the bigger picture of the theme. “Criminal” shows just how much crime can vary, and this pod shows how vast and different love can look and be.

Its stories are unexpected, and just what you need in 2021. Host Phoebe Judge is just as gracious and calm as in “Criminal,” and it’s nice to hear her present the other side of humanity instead of all the bad we do. I thought it would be overrated and soppy. “Who wants to listen to a bunch of romantic rollercoasters?” I thought, but it’s not that at all. Much like “This American Life,” the stories presented are out of the blue and from all over.

Apple Podcasts has over 7K ratings with around 83% of them 5-star, and 839 written reviews. New episodes come out Wednesdays (used to be Thursdays), and they’re usually about 22 minutes long. 44 episodes in the archive, with OwlTail’s top being Episode 2: “Something Large and Wild” and Episode 3: “Always Tomorrow.” My favorites are Episode 27: “He Left in a Storm, He’ll Return in a Storm” and Episode 20: “Roselle and Michael.”

Random trigger warnings for only a few episodes including vivid descriptions of 9/11.

Marie Tanksley, the podcast director, can be reached at podcast@kcsufm.com.