What El Centro is listening to for Latinx History Month 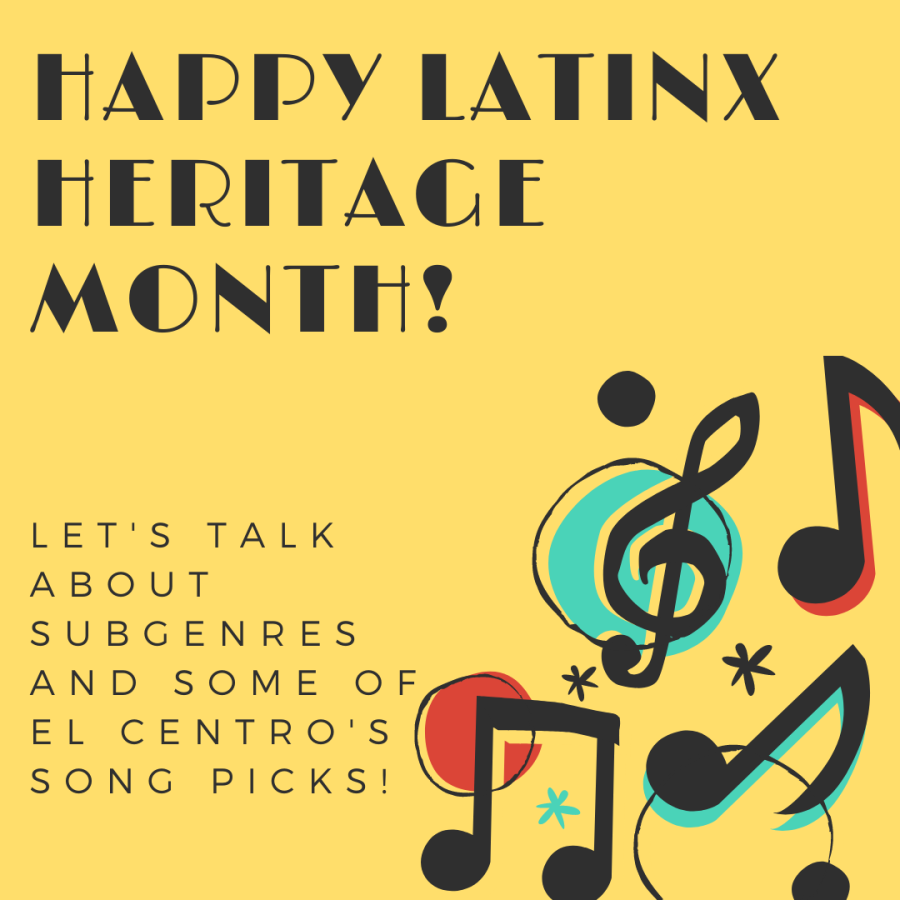 Modern Latinx music is rooted in centuries of music creation in Mexico, Central America, South America, the Caribbean, among other countries. The music has mixed influences from early Native American, African and European music. The subgenres of Latinx music are broad and diverse, and each is culturally significant to the area where it originated. What follows is a brief overview of some of the most popular subgenres.

Reggaeton is increasingly popular across the world. It found its roots in Puerto Rico in the 1990s. Reggaeton fuses Jamaican reggae with hip-hop and salsa music to form a unique genre of its own. The subgenre takes rhythm and percussion found in reggae music melded with rap and, most notably, Spanish lyrics. Reggaeton is dominating a lot of Latin music in popularity.

The salsa subgenre comes from Cuba and Puerto Rico. This music usually has big bands and are meant to accompany dance. Salsa was created when Cuban dance music was combined with Afro-Cuban and Latin jazz. Contemporary Salsa is fast-paced with call and response elements and a recognizable salsa rhythm.

Mariachi is a subgenre that dates back to 1500s Mexico. It is important to many celebrations in the country. Mariachi consists of bands that usually have trumpets, violins and guitar. The guitar traditionally used by mariachi bands is the vihuela, a rounded guitar that carries the rhythm.

Latin pop is one of the most modern and popular subgenres today. Latin pop is a genre which is always changing and incorporates many different characteristics of other subgenres. These songs are often in the Spanish language and have elements of salsa or rock.

Latin rock, indie and alternative are all music genres that are quite similar to the general definitions of those genres but with Spanish language and influences from other Latin subgenres.

September 15 to October 15 is Latinx Heritage Month. In this month, it is important to highlight and learn about the extensive history and culture of Latinx countries, but that learning and celebration shouldn’t end in October. Learning about and celebrating Latinx cultures includes the rich diversity of music that is important to the many cultures encompassed by “Latinx.”

El Centro is Colorado State University’s Latinx cultural center. For resources, you can go to their office in the Lory Student Center or visit their website. To listen to incredible music, you can check out their playlist, “El Centro Kickoff Playlist 2021.” The playlist offers a lot of fantastic songs to celebrate, all curated by the students of El Centro.

On this playlist, you can find upbeat Latin pop songs such as “+Linda” by Dalex; “MIA” by Bad Bunny; La Curiosidad by Jay Wheeler, DJ Nelson, and Myke Towers; and other fantastic songs. It features reggaeton songs such as “Gasolina” by Dadd Yankee; “Con Altura” by ROSALÍA, J Balvin and El Guincho; and “Ella Y Yo” by Aventura and Don Omar. Some songs with more band style include “De Contrabando” by Jenni Rivera; “El Chico Del Apartamento 512” by Selena; and “Adiós Amor” by Christian Nodal.

Check out this playlist to find amazing pieces of music!