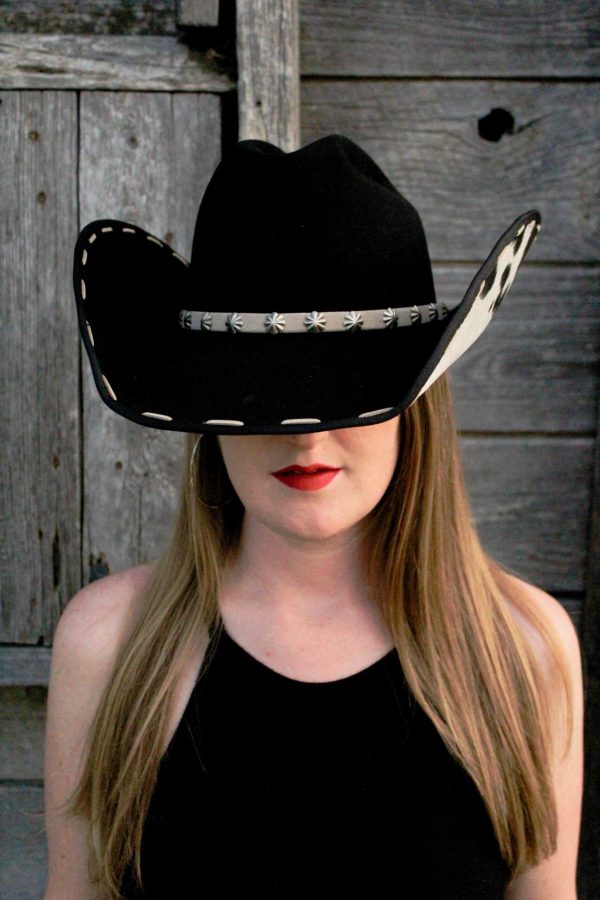 Bonnie Sims of Everybody Loves an Outlaw poses in a hat. | Natalie Jo Gray

Bonnie Sims of Everybody Loves an Outlaw. | Natalie Jo Gray

Some musicians spend their whole careers waiting for the right time, place and people to give their song a second listen, for the break that will propel them into stardom. Most musicians will spend their whole lives making the music they love yet are never lucky enough to say that a million people have heard them sing.

Texas-raised Colorado dweller Bonnie Sims is lucky enough to say this. In fact, Bonnie can say that over 70 million people have heard her sing.

The placement that ‘came out of nowhere’

On an early morning in June, Bonnie woke up to an email with unbelievable news: Everybody Loves an Outlaw, a musical project she and her husband Taylor Sims started a few years ago, landed their song “I See Red” in the Netflix hit film “365 Days”.

The last six months have been a crash course in so many things, including writing for this style of project.” – Bonnie Sims, musician

“We went from a few thousand spins to five million overnight, and now we’re (over) 70 million Spotify streams in the past six months,” Bonnie said, reliving the life-changing experiences the year 2020 brought.

Captivated by Bonnie’s soul-fired grit and powerful vocal delivery in “I See Red” paired with the fact that the full-length song was featured in a scene with no dialogue, viewers were converted into fans, which translated into streams and downloads.

The rapid growth and virality of the song captured the attention of top industry executives, the spotlight somewhat overwhelming for the musical couple who had been building local success in music through their own hard work and self-management. As independent musicians, Bonnie and Taylor were accustomed to handling all of the business aspects of their music, from booking gigs to developing a strong online presence.

“This truly came out of nowhere,” Bonnie said. “We had released the song years before, and it had a handful of high-profile placements before ‘365 Days,’ so the overnight success really surprised us.”

The following month ensued with a frenzy of calls from major labels, all wanting to connect with the creators behind the overnight hit.

Exploring songwriting with a new mindset

When Columbia Records called with an offer on their single “I See Red,” Bonnie and Taylor realized they were hitting in a whole different ballpark.

“I have become, for what seems like the first time in my creative life, focused on a single project,” Bonnie said.

The project Everybody Loves an Outlaw has involved writing and recording half a dozen songs for release throughout the winter and spring, venturing into a sound that brings an edge to rock, country, blues and soul.

Bonnie and Taylor have adopted a new approach to songwriting after collaborating with Robbie Nevil, producer and industry veteran, on “I See Red” and other songs with Everybody Loves an Outlaw. Nevil wrote “I See Red” and has an impressive resume that includes producing and writing music for Disney hits to being a successful guitarist and artist in his own right.

“Robbie has been in this business for decades, so the last six months have been a crash course in so many things, including writing for this style of project,” Bonnie said.

It has always been and will always be about the audience for me. That is what keeps me creating music and connecting through it.” – Bonnie Sims, musician

Previously, Bonnie and Taylor had been writing music based on personal narratives and experiences, but now the duo aims to create instrumental hooks and express emotion in abstract ways that feel universal.

“We had always created music in the studio that we could reproduce identically in real time, so branching out from that was both terrifying and freeing,” Bonnie said.

Exploring new writing styles comes with the challenges and rewards of co-writing as not just musical partners but partners in life. For Taylor, writing sessions with Bonnie can quickly turn into a clash of style, but at the same time, they have the effect of encouraging each other to finish songs and stories.

“I tend to let the editor out of the cage a lot sooner than Bonnie does,” Taylor said, “where she is much more free-flowing and open to anything that comes down the tube in the moment.”

This viral success couldn’t have come at a better time for the duo. Within the context of the pandemic, the live music industry has taken a financial hit due to widespread cancellations of large shows and festivals.

In a typical year, Bonnie and Taylor would have been performing their norm of 150 to 200 shows across the Front Range with their band Bonnie and the Clydes. The band has accumulated a dedicated fan base in its near-decade of existence, with Bonnie leading the charge on mandolin, Taylor’s talents on guitar and both joining forces with high-spirited country storytelling.

On top of becoming one of Northern Colorado’s favorite power couple for their memorable live performances, Bonnie and Taylor sustained their living through other music ventures such as private lessons and classes for kids. Although the two call Colorado home, their story grew its outlaw roots in Texas.

Bonnie grew up in Texas and gravitated toward music from a young age. Her career-musician and banjo-playing father, Mike Cruciger, put a guitar in her hands at age 12, and the father-daughter duo toured and released music for the next five years. Before she knew it, Bonnie was off to South Plains College to study music.

“I was so lucky to have a musician dad and was encouraged to pursue music as a career,” Bonnie said.

“I have only ever wanted to sing and play music and only saw that for my future self growing up,” she said.

It was in Bonnie’s first semester at South Plains College that she met her husband and musical partner. With little to do in the town of Levelland, Texas, the two passed the time playing music in bluegrass circles and started to build up a repertoire of original songs and classic covers.

“I remember her walking up the hall with her mandolin in hand, wearing holey jeans and a bright smile,” Taylor said.

The duo’s harmonization went beyond the music, and the inseparable Bonnie and Taylor ventured out of Texas and landed in Colorado in 2010.

‘No limit’ to the direction of the music

After working with Columbia Records on the promotion of “I See Red” in July, Bonnie and Taylor were able to release their latest single, “Blood on a Rose,” independently on Nov. 14.

“That just felt like the right choice moving forward for us and has given us way more creative control,” Bonnie said.

Bonnie and Taylor’s progression is proof of artists who are genuinely interested in the long-term development of their own craft, motivated to keep creating for the sake of the music.

“It has always been and will always be about the audience for me,” Bonnie said. “That is what keeps me creating music and connecting through it.”

Bonnie and Taylor had the chance to perform at the dream Colorado venue Red Rocks Amphitheatre as Everybody Loves an Outlaw on Sept. 14, 2020 with Gasoline Lollipops. The show sold out within 10 minutes and had a limit of 175 people.

“Their energy is unmatched,” said Emily Kintzel, one of the lucky fans at the Red Rocks show in September. “They give it their all in their live performances — no matter the size of the crowd.”

Looking ahead, there is clearly much more in store for Everybody Loves an Outlaw, fans old and new anticipate great things from these creators.

“We don’t have any live performance plans right now, but we’re gearing up to play live as Everybody Loves an Outlaw when the time comes,” Bonnie said. “Now I really feel like there is no limit to the directions we can take our sound.”