Round Two: Bandwagon’s Battle of the Bands 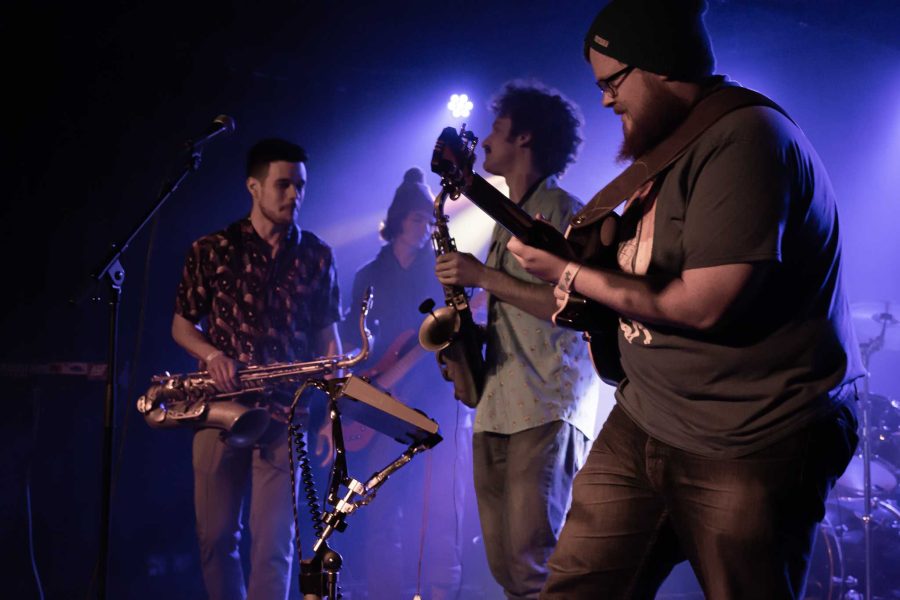 Do you know how a battle of the bands’ competition works? For those who do (show-offs), go on ahead and skip these next two paragraphs. Brainiacs.

For those still with me, here’s a crash-course on how BandWagon’s Battle of Bands competition scoring plays out.

Four bands participate every night, each band gets roughly thirty minutes on stage to perform its set. The order the bands perform is completely random and each act is judged by a panel of experts in the Fort Collins music scene (i.e. promoters, engineers, booking agents, owners of local venues, etc.).

Each audience member gets a token upon entry. Everyone in attendance then places the token of their favorite act in a clear pitcher bucket in the back of the Hodi’s Half Note to declare who they believe won the battle.

The judges’ scores and audience scores are tallied and then — boom! There’s a winner of the Battle of the Bands. 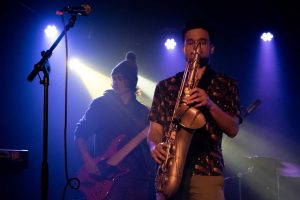 The groovy five-person band Space Force set the funky tone of the evening. The band was groovy, hypnotic, hip-swaying and, some may say, out-of-this-world.

Bringing two saxophones, a bassist, full drum-kit an electric guitar and beat board, they almost had it all. Almost. The group’s stage presence wasn’t as strong as acts that followed it, but their technical skill was on full display.

Keeping the harmonies on all instruments in sync, matched with some sweet saxophone or electric guitar solos, Space Force displayed their unique soundscape. They ended their set with a cover of Marvin Gaye’s “What’s Going On?” which was a classy way to bring things to a close.

The mood around me felt as if people had no problem immersing themselves in the set, even with no vocals, which was evident by the band receiving the second most tokens in the fan-vote.

Next to the stage, My Dog Ate Chad.

In their introduction, it was announced this was the group’s second Battle of the Bands competition. It may have been unfair, but my bar was a little higher for them after hearing that. 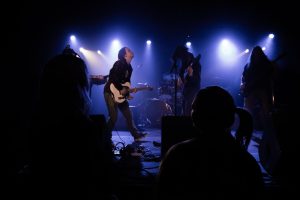 My Dog Ate Chad showed up with a piano, two electric guitars, two vocalists and a bassist. The high-energy rock’n’roll performance was impressive, to a point that it was making me tired even just to watch.

The band member on electric guitar and vocals was leaping around the stage the entire set. One part of the band I enjoyed was that the drummer was also singing!

At one point, the musicians did a swap mid-set. The band member on electric guitar dashed to the drumkit and the drummer threw on the electric guitar strap. One song was performed this way, then the two swapped back.

While very cool, I’m left thinking, “was the swap truly needed?” Both were singing prior to the swap and there wasn’t a new guitar being brought on-stage. It was cool to watch, but was it needed for this set? Probably not.

While the band put on a crowd-pleasing show, the judges didn’t seem to buy it, as the group finished last. 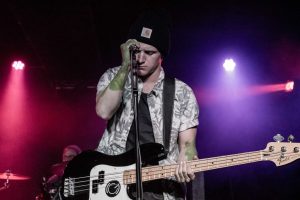 Glass Cases is composed of three people who man the drum kit, piano and bass guitar (most of the time). Along with that, the group brought out a ukulele, a beat pad and a mac that seemingly had other electronic components to their soundscape.

The electric-alternative sound was a change of pace from the previous performer, but their overall sound was spot-on. Glass Cases set bounced between playing unreleased songs, older hits like “In Between,” and even covered a Twenty One Pilots song.

The component holding this band back, energy. In the crowd, people didn’t seem very enthusiastic, even when the Glass Cases were almost pleading for some type of response. It didn’t seem to go over too well.

In my opinion, the band played a killer set. The sound was good. The lighting was good. The energy was just off, which is what ultimately led to its demise, finishing in third on the night.

Last but not least, Graham and the Good Painters. 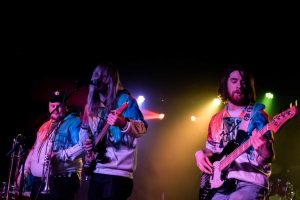 Let me tell you, this was a performance that put a smile on my face. Graham and the Good Painters were composed of a piano, trumpet, drum kit, electric and bass guitar.

Before the set began, the lead vocalist also gave a disclaimer that the band planned on having a trombone player but he fell ill earlier in the evening. If they wouldn’t have said that, I may have honestly not noticed a difference.

Dressed in colorful tie-dye hoodies, they were the only group to wear matching attire this evening. It was terribly difficult to put them in a genre category, but if I had to pick, Graham and the Good Painters are a form of nuance soulful rock.

Lyrics were being echoed by the crowd. People were stomping the floor to match the kick drum and clapping along. It was clear this band had the most jubilant attitude from their audience.

A heartfelt performance came to a close when the band ended the night with an unreleased song, “I’m Just Excited to Grow.”

The band had just enough charisma, energy, and wonderful sounding tunes that led them to being crowned winners of the night. They will move onto the final round of the Battle of the Bands going down in March.

Round three which will be throwing down on February, 28 at Hodi’s Half Note with performers: Dream Database, People in General, TARO and Lady Denim.