Self-Discovery and Strange Venues: a Conversation with Cactus Cat

A planetarium is a strange place to play a show. That much likely goes without saying for most concert-goers, music fans, and bands.

That said, I was a bit surprised that Fort Collins’ own Cactus Cat seemed very much at home in the dome at the Fort Collins Museum of Discovery. Their long-form, ambient songs fit quite naturally with the psychedelic imagery that surrounded them.

Simply put, if it were insinuated that Cactus Cat was a band assembled for the sole purpose of playing in this venue, the group’s high level of musical synchronicity would be the only evidence to the contrary. 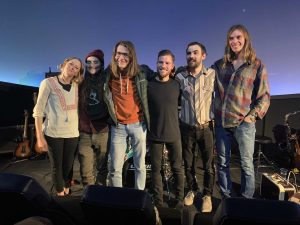 “I thought (the idea of playing in the dome) was awesome,” said Aaron Varnell, saxophonist and ukulelist. “ I know (the manager of the dome at the museum). He’s heard us play before, and when I saw they were doing music up here, I was like, ‘man, that would be awesome to do some crazy visuals in the back, playing a weird ambient set’…”

They agreed that having a visual element to accompany the music was almost akin to a more high-profile event, such as a stadium tour.

“That’s something that we (had) never had was visual art played along with the music before, so it’s a whole different field,” said Jakob Corbin, the band’s guitarist.

Cactus Cat are well-known for being skilled instrumentalists, so it’s no surprise that there’s some formal training between the five of them, ranging from participation in jazz band to the complete absence of any sort of formal lessons.

“I had a lot of formal training in high school and then walked away from it for like, all of college … and then a few years after college, and then came back to music,” Varnell added, “Like, when I moved to Houston 5 or 6 years ago, I didn’t even bring my saxophone with me. I was that removed from music, and have come back into it entirely.”

Other members of the band didn’t have any formal training at all, learning entirely through experience.

“When you [expose] yourself to other people and you start taking their opinions about what you’re doing into account, you keep that in mind and you learn from other people,” Corbin said.

Varnell took some time off of college in order to re-center himself and said college is not only important as a way to study your academic field of choice but also the type of person that you’d like to be. But he said people accomplish this in ways other than college.

He said he encourages parents to support their children when they venture off to find who they are, even if they stray from the “typical” path. He says he would want his daughter to feel free to do the same.

“I’d be like, ‘yo, do it!’” Varnell said. “I know that if she’s feeling that call, she needs to just run with it, and try to do it smart, and do it with intent of if you’re going to come back and finish, actually going back and finishing.”

Corbin spoke to a similar experience in his own academic journey.

“It’s good if you find yourself liking a subject or a certain discipline, but the spectrum of school is just kind of difficult,” he said. “I’m still trying to figure out how to be a student. Now I’m on the final push … but I’ve been way more focused and headstrong in my education.”

In January, the band plans to go into the studio to record a full-length album. You can find their music and information about upcoming shows.