Mishawaka Amphitheatre: 100 Years In and A Century To Go (Collegian Feature) 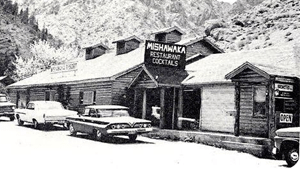 In commemorating the 100-year anniversary of the Mishawaka Amphitheater, music lovers donned their best 80’s get-up, packed their camping gear and took the 45-minute journey up the Poudre Canyon Friday, March 25th,  to participate in the celebration.

Commonly known as the Mish, the amphitheater started out as a simple homestead built by motorcycle venturing musician Walter S. Thompson in 1916. Although it was no easy process purchasing the land from the government, Thompson was persistent. While it took him nearly three years to complete, the Mish has been a landmark institution of music and community within Northern Colorado since it’s inception. Beginning as a small dance hall, the property is home to two venue spaces that host local and national acts alike. 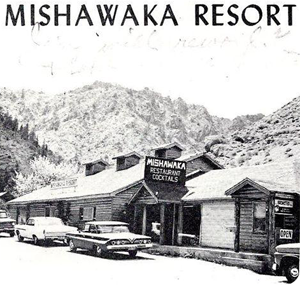 Although it’s been passed from owner to owner over the last century, up until 2010 the property had fallen into complete disarray. It wasn’t until current owner Dani Grant, alongside husband, Matt Hoven purchased the property that the Mish became a community symbol once again.

“As music lovers and community members, we watched the Mish and thought this could be better; there’s more potential here. It was kind of a squandered opportunity,” said Grant.

According to the couple, while they had their eyes on the space for some time and jumped when the purchasing opportunity arrived, they were fully aware of the daunting task ahead of them.

From revamping the indoor venue space, to scraping grime off the walls at three o’clock in the morning, Grant said there were moments in which she felt completely overwhelmed. As serial entrepreneurs, this is the sort of challenge in which she and Hoven have often thrived.

Putting their hearts into the project was just apart of the job for them. Pouring blood, sweat, and tears into the Mish was a small price to pay to complete the extensive makeover that would revitalize not only the property, but it’s public image as well. Previous owners of the venue struggled with the various entities with various interests in the land, river and roads surrounding the Mish.

While it was a slow moving process, Grant said their efforts started to pay off in their first season. The success of bringing local concert goers and national acts back together under the same roof, or in this case under the same stars, was a huge win. Grant said they saw a lot of progress in diversifying genres.

Grant says the most effective revitalization didn’t come exclusively from their hands, but instead happened because of the High Park Fire.

“When the fire came and threatened the Mishawaka, a lot of the work we had done with commissioners, community members, and canyon folks was somewhat tee’d up,” said Grant, “when the fire came everyone realized, in the blink of an eye this place could be gone forever, why are we holding on to resentment or disinterest. That was a critical key moment.”

Grant found a lot of meaning in wake of the natural disaster.

“A forest fire is a cleansing event. In my mind it was symbolically a cleansing for the Mishawaka. When the firefighters said ‘long live the Mish,’ it was like we had broken through and the people were back and it felt good,” said Grant.

According to Grant, planning the anniversary celebration known as the Mish 100 was no small task. Although this marks only her sixth year at the Mish, she says that her and her team have been thinking about the event for nearly three years.

For Grant, this being the first of the Mish 100 events held a lot of gravity and needed to be reminiscent not only of what the Mishawaka is, but what it has meant to the blossoming arts scene within the Fort Collins community. It’s for this reason, Grant’s team decided to take a holistic approach to creating a community centered soiree.

The event, including an art opening at the Downtown Artery, a two-set concert in the SpokesBUZZ Lounge at the Mish and an 80’s themed dance party culminated in a sleep-out with midnight snacks and next-day brunch.

Focusing in on the art opening, Mishawaka Events Coordinator Taylor Strope-Walker says she spent a few months curating community created, Mish inspired, artwork. At the center of the show, was a drawing Grant commissioned local artist, Chris Bates to create. The intricate pen and ink image depicts the Mish from three different thematic vantage points including past artists and owners, history of the venue and canyon, and longtime employees.

While the event attracted some new-comers unfamiliar with the Mish like Ariel Roeder, and friend Joanna Hillman who came despite not knowing exactly what they were getting into, the Mish 100 primarily hosted seasoned Mish-goers like Ed Wallace.

According to Strope-Walker, the event was special not just because it pulled in community ties in an apt way, but because it honored some of the people who work at the Mish. The two-set concert featured the bands of Mish employees Alana Rolfe of Stella Luce, and Matt Mahern of the Velvet Rope.

According to Wallace, after discovering the venue about three years ago, his experience at the Mish has been a good one across the board.

“It has a very eclectic crowd; a free-spirited crowd,” said Wallace, “so it’s been a very positive experience.”

For Grant and Hoven, although owning the Mish hasn’t been a walk in the park, the venture has been rewarding. It’s current success constitutes the grit and longevity of their hard work. The couple insists that they are just simple caretakers of the space.

“The hundred year is about celebrating this wonderful community asset, she [the Mish] is much bigger than us,” said Hoven.

“I think that’s why we are the caretakers right now, to set her up for the future. She’ll be here long after us,” said Grant.

Collegian Reporter Saruh Fenton can be reached online at music@collegian.com.