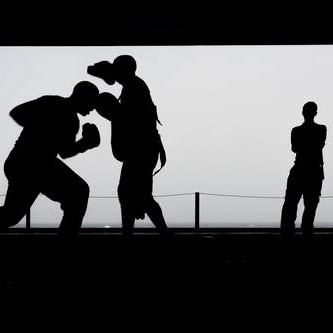 What’s next for the Ultimate Fighting Championship Welterweight Division?

On Feb. 13, we saw the clash of two former teammates for the belt in what is arguably the UFC’s most stacked division. At UFC 258, Welterweight Champion Kamaru Usman defeated Gilbert Burns by third-round technical knockout in what was 10 minutes and 34 seconds of pure entertainment.

Usman looked solid in what was supposed to be the toughest matchup for him since joining the UFC in 2015. Burns, a black belt in Brazilian jiujitsu, was thought to have the answer for the savage wrestler Usman.

Usman had not just beaten but dominated the Welterweight division since joining the promotion. It seemed Burns had found the answer to one of the UFC’s hardest puzzles, but after being stumbled in the opening minute of Saturday’s main event, Usman made the adjustments to control the remainder of the contest. His game stemmed from his solid jab, and its improvement can be credited to the efforts of coach Trevor Wittman. Wittman has aided in the success stories of some of the UFC’s best strikers, and the move to Colorado seems to be helping the Welterweight champion of the world as well.

The question after any UFC event is what is next for those involved?

The Welterweight division in the UFC is as stacked as any other, so you would think that answer would come easy and that there would be someone new in line for the reigning champ. So who is next for a title shot against the Nigerian Nightmare?

Give (Dana) White three to four months to promote this contest, and you could see pay-per-view heaven for the mixed martial arts leader.”

The simple answer is there really is no clear number one contender at 170 pounds. Usman has cleared out four of the top seven contenders in the division. Only one guy in the top five has not yet challenged the Nigerian native for the belt. That one guy would be Stephen “Wonderboy” Thompson. Stylistically, this matchup could be a fun one. Thompson’s karate style of striking could prove to be difficult for Usman, but no one seems to believe that Wonderboy has the wrestling to keep the Division Two national champion off of him.

The only person in the top five believed to have that skill set is Colby Covington, who managed to survive four and a half rounds with Usman back in December of 2019 before being TKO’d. UFC president Dana White said in his Feb. 12 media scrum that he is aiming to book Leon Edwards, third-ranked Welterweight, versus Colby Covington, first ranked Welterweight. Since then Covington has publicly claimed he will not fight Edwards, but only plans to fight Masvidal or the champion.

But following his win on Saturday night, the name that seemed to come out of Usman’s mouth more than any was Masvidal.

This matchup took place last summer when Masvidal accepted the fight on just six days’ notice when Burns tested positive for the COVID-19 virus. This fight was a big sell without months of hype and a training camp. Give White three to four months to promote this contest, and you could see pay-per-view heaven for the mixed martial arts leader. Not to mention this would be a great coach pairing for the 29th season of “The Ultimate Fighter” (both Usman and Masvidal’s managers have said they would take part in the series’ return).

For now, it looks like Usman will have to wait for a solid number one contender. For Gilbert Burns, after losing a title fight, his goal is to find the quickest way back. After the loss, Burns was visibly distraught and seemed even more hungry to be the champ in his post-fight comments.

For him there are a few fights that make sense. The first one that comes to mind would be the fight with Thompson. Thompson, ranked five in the Welterweight Division, has yet to have his title shot and is probably one win away from that becoming a reality.

Another intriguing fight is a fight with sixth-ranked Michael Chiesa. Chiesa is coming off a dominant main event victory over ninth-ranked Neil Magny. Chiesa’s wrestling style would be a great matchup with Burns’ jiujitsu. Styles make fights, and a fight between Burns and Chiesa could be one of the better fights in the UFC’s Welterweight Division.

Either way, for now, Burns will be playing gatekeeper keeping other contenders away from stealing his shot at Usman and the Welterweight belt.