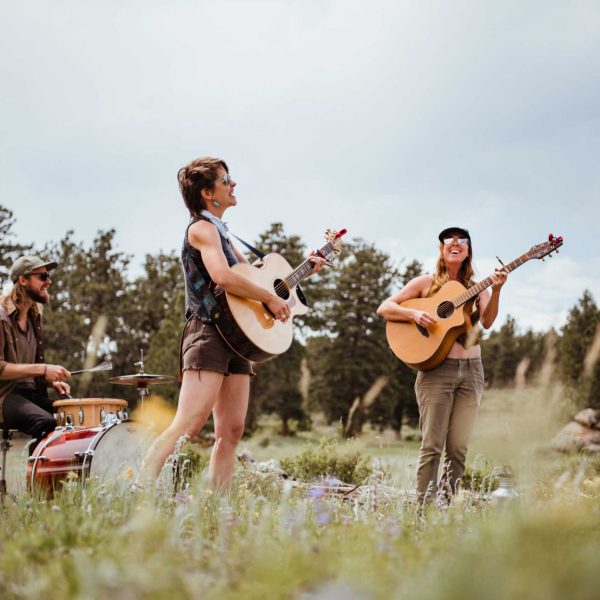 But one song persisted above it all, a song played by musicians in a forest.

No microphones, no amplification. Just the simplicity of music in the trees.

“Even during this pandemic and times of uncertainty, being outside and listening to music can happen,” said Harrison Goodale. “We want to provide a space where people feel welcome and safe to enjoy art and nature.”

Goodale is a co-founder of nonprofit Sustain Music and Nature along with Betsy Mortensen, and this ‘space’ he refers to is called the Sagebrush Sessions. The series is a free hike-in concert experience that offers audience members one of the few and far between opportunities to see live music while social distancing. The audience and musicians hike into the concert location, such as Roosevelt National Forest or Golden Gate Canyon State Park, and once the music starts, all worries are left behind.

“Parks and music have been keeping all of us sane throughout the pandemic, and we need to show up to make sure musicians can make a living from their art and that public lands remain protected and taken care of,” said Goodale.

Sustain Music and Nature has played a crucial part in literally ‘sustaining’ the live music scene in Fort Collins through the Sagebrush Sessions and other projects. The nonprofit’s driving force is to have music be a voice for something that cannot speak for itself: the environment.

The next Sagebrush Sessions on Sept. 20 in Lory State Park is already accumulating a waitlist, with music fans eager to watch a distinguished lineup including Tierro Band with Bridget Law, The Annie Oakley, and Stevey. A lucky 25 people are permitted to attend and the show is completely acoustic, making for an extremely intimate and unique listening experience.

Bridget Law, founding member of Elephant Revival and globally acclaimed fiddle player, performed for the first time in months in August with Elephant Collective, and is looking forward to performing at the Sagebrush Sessions on Sunday with Tierro Band. Stevey and The Annie Oakley had a similar story after experiencing a pause in live shows since early 2020, both longing for the energy of a live audience.

The Annie Oakley, folk singer-songwriter duo of twin sisters Jo and Sophia Babb, played for the first time in-person since March at a backyard concert series called Songs Under the Willow in July.

“It felt surreal and scary and wonderful to be in front of human beings again,” said Jo, “We’re looking forward to making that human connection again face-to-face at the Sagebrush Sessions.”

The idea of the audience being transported by a musician’s energy and talent is something that Betsy Mortensen, co-founder of Sustain, sees as an advantage to creatively approach environmental communications. Mortensen has learned through her background in conservation science, that the traditional approach to environmental communications isn’t as effective or as positive as music.

Mortensen said, “A lot of people shut off when they hear about the terrible things happening [to the environment], or when they get bombarded with graphs and data spelling out the doom and gloom.”

“We rely on the emotional impact of music, paired with the cultural influence of musicians, to grab people’s attention about environmental issues. Music reaches just about everyone, no matter their demographics,” Mortensen said.

Musicians have proven to be successful in advocating outwardly for environmental causes through their actions, such as Jack Johnson’s commitment to raising awareness about ocean plastic pollution. The steady rise of the idea of #wastefreetours implicate the influential power that musicians have on culture and behavior. Bridget Law herself has donated her talents to the Fracking Resistance Movement in Colorado, as well as the protection of public lands.

“If we want to see change, we all have to act responsibly on the planet. Musicians have to lead by example,” said Law. “Music can be used as a force for change both by witnessing the conscious actions of the musicians as well as hearing their messages through the music.”

As Law said, musicians have a magnetic draw through their actions, but also raise awareness through the language they know best: songs. Law herself wrote “Ancient Sea” as an instrumental prayer for the health of the oceans. Fort Collins-based singer-songwriter, Stevey, was a winner of Sustain’s Backyard Songscape contest in May with a song he wrote called “Woods” after an epiphany while hiking near Buena Vista. “Woods” was inspired by the sense of belonging Stevey felt being in nature, a stark contrast to the defects of modern culture and commercialization of what it really means to ‘go outside.’

“That day of hiking, unaware of exactly where I was or where I was going,” said Stevey, “Rather than feeling lost, I felt found. I hashed out most of the instrumental on acoustic guitar after the hike.”

The Annie Oakley approaches songwriting as a conduit for issues they are passionate about as well, such as their song “Our Red Earth,” which touches on intense topics such as fracking, cultural appropriation, and sexual assault.

“Songwriting is a form of communication that can be used to express anything, but can really shine in effectiveness for justice and change,” said Jo Babb of The Annie Oakley.

“The tools of our trade are symbols, metaphors, irony, parody and so on. When we use these things in certain contexts, we’re able to transcend the factual and tangible and connect as humans in ways that we wouldn’t otherwise,” said Babb.

Listeners can expect to find solace in nature and storytelling through music at the upcoming Sept. 20 Sagebrush Sessions. Tierro Band with Bridget Law has a hypnotic, captivating energy paired with exceptional musicianship. Twin sisters Jo and Sophia Babb of The Annie Oakley are known for other-worldly harmonies and have moving, folk-rooted stories to tell. Stevey brings raw interpretations of the world around him through the folk-pop genre, with a voice that is rich and cries out from the soul.

Although the future of the music industry is uncertain, Sustain Music and Nature is a positive force now more than ever, accelerating their drive to support local and touring musicians that embrace the outdoors. The Sagebrush Sessions on Sept. 20 is at Lory State Park, a place that Goodale hopes resonates with audience members through music.

“If this place is special to a band, it becomes special to the listener, because the end result is art,” said Goodale.

“At the end of the day, science is no doubt important, but art moves you.”

Author Taylor Sandal can be reached at video@kcsufm.com