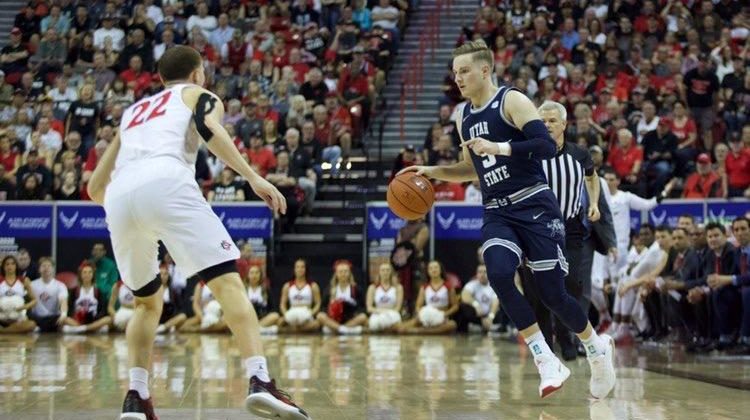 A match-up of this magnitude hasn’t happened since the 2007 and 2008 seasons when the same two teams battled for the men’s Mountain West Conference Tournament Championship. Defending champion, Utah State Aggies square off against the one-seed, San Diego State Aztecs.

Preseason player of the year and last year’s MVP of the tournament, Sam Merrill, will be trying to get his Aggies to the big dance in back-to-back seasons. This feat would be the program’s second time going in back-to-back years – the last time it happened was in 2000 and 2001 when the program was still a member of the Big West Conference.

On the other side, San Diego State has gone the distance five times, the most out of anyone in the conference since the Mountain West Conference Tournament began in 2000. This duel lived up to the billing.

Wooden Award finalist Malachi Flynn of San Diego State tipped off the game ice-cold from the filed shooting 0-4 through the first six minutes. His teammates Matt Mitchell and K.J. Feagin combine to push an 8-0 run to give the Aztecs the edge 10-7 before the first stoppage of the game.

Both teams were struggling to create offense through the first nine minutes of play as both posed an abysmal 30% field-goal percentage.

San Diego State’s big man Yanni Wetzell was the story for the Aztecs as he and Trey Pulliam string together a six to nothing run to give San Diego State a commanding lead of 27-11 with three minutes left to play.

At this point, Utah State had shot from behind the arch at (1 for 11) or 9.1%. That’s when Justin Bean, Diogo Brito and Merrill started to come alive. Bean’s six rebounds were a huge moment shifter for the Aggies in the first half.

The Aggies’ 11-2 scoring run led them into halftime down 29-21 to the Aztecs. Throughout the first half, it felt as if Utah State couldn’t hold onto the ball picking up eight turnovers in contrast to none by the Aztecs.

Utah State opens up the second-half of play fueled by Neemias Queta and Merrill going on a 7-0 run to cut the lead down to one.

Almost on cue, Flynn picks up his bucket of the second half on a fast-break transition layup. Alphonso Anderson responds by hitting back-to-back threes for the Aggies to keep them in the game.

Queta and Merrill continue to dominate the scoring load for Aggies. Merrill knocks down back-to-back threes while Queta gets the friendly roll on a hook shot in the lane along with a powerful right-handed jam to give Utah State their first lead 44-42 since the 15-minute mark of the first half.

The last four minutes of the game was written by Merrill hitting timely shots, and arguably, the biggest shots of his career.

“I was just trying to get a good look,” Merrill said. “I had been hoping I’d get that opportunity.”

Merrill, with six seconds on the clock, went one-on-one with Mountain West All-Defensive player Feagin and tees it up from 25+ feet.

The final score of the contest was Utah State 59 – San Diego State 56 as the Aggies punch their automatic bid into March Madness. This is the first time a men’s team has won the Mountain West Tournament since New Mexico did it in 2013 and 2014.

“He’s just everything a college athlete is all about,” said Head Coach Craig Smith .

Utah State awaits its official seeding for the NCAA tournament on Selection Sunday.