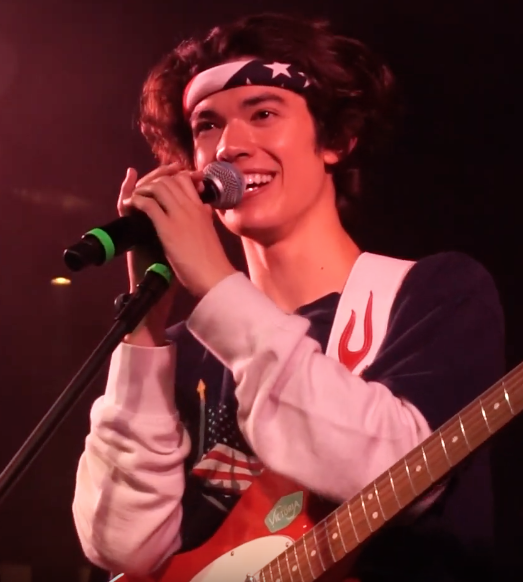 Not every artist can be a charismatic and dynamic leader to a crowd of introverts like Conan Gray.

On Dec. 2, Conan Gray took the Odgen Theatre by storm and delivered an emotional rollercoaster of laughs, tears and rage to an audience consisting largely of teenagers and young adults, anxious to see their favorite Twitter persona and singer-songwriter.

Conan Gray, 20, is midway through his second U.S tour before the release of his first full-length album. He started off as a small-town boy in Texas, writing songs and publishing them on Youtube. “Idle town” is the song that generated him mainstream attention, and what he jokes, was his ticket out of the small town which he hated so much.

Gray has stopped his Idle Town tradition that started on his first tour of wearing a pink cowboy hat. At this concert, however, fans came prepared wearing mini pink cowboy hats, and a person in the front row bringing a hat ready to hand over to Gray while he performed his nostalgic hit.

This is my second time seeing Gray live and his production, stage presence, and delivery have all improved. His stage set up was adorned by lights that framed his band and a background of a frowning face. His light set up this time around were more complex and set different moods and, for some songs, relied on the drumbeat for cues which made for an intriguing show.

Gray himself didn’t miss a beat, hair-flipping, dancing and adding character to each of his songs with his sassy facial expressions and contagious laugh. While experiencing technical difficulties he even instructed his band to play the Jeopardy theme while he danced on stage and joked, “Technical difficulties? This is my favorite song!”

On his first tour, his songs were still new, and he performed them as they sound in the recording. This time around he seemed to be having more fun on stage, adding vocal runs, and even providing a whole band arrangement for his acoustic song, “I Know A Place.”

The set started off with the intense drumbeat of his song, “The King,” running onto the stage singing, ready to announce his royal arrival. Gray has a fun relationship with his fans, as they are around the same age as him or young teens. He joked about how, if you follow him on Twitter, he is sorry for all the “sh** posts.”

He has not been shy about sharing things about his personal life on social media and interviews, such as not having his first kiss until the age of 19 and his difficult childhood. Things got more intimate when Gray shared a never before released song he wrote about his childhood and shared with the audience that he didn’t think he would live past his teenage years due to depression.

This created an intimate feeling for the audience in a venue with a capacity of 1,600. Additionally, he encouraged the audience to interact with him and even each other during and in between songs.

“Comfort Crowd” is a song he wrote about his best friend. Before performing it, he asked everyone who came with a friend to turn around and give their friend a hug, and then gave the entire audience an air hug and mentioned how we are all his friends too.

This was a very cute moment but, if I could describe Gray, it would be like Buttercup from the Powder Puff girls; all cute one minute, and raging the next.

Showcasing his duality, he prefaced his song, “Checkmate,” by calling all of the crowd clowns. I have to admit, he was right. “Checkmate” is about being into a person who continually strings you along, and despite all the harm they cause you, you know you’ll reply to their text within seconds.

He said we, and him, are Boo Boo the Fool for responding to those who keep breaking our hearts. After calling us all out, Gray let our heartbroken selves know that we collectively deserve better.

The real climax of the show came when he surprised the audience with a cover of “Burnin’ Up” by the Jonas Brothers. Conan’s love for the early 2000s is fairly evident in the clothes he wears, his pop-punk music style, and the playlist he plays before his shows that feature hits by Taylor Swift, Hannah Montana and Avril Lavigne. He really knows how to make his audience feel at home.

Overall, Gray provided a fun and entertaining evening that was mainly tailored for those who often feel alone and hopeless. Seeing his growth throughout the year makes me believe that he can only Grow bigger (get it because he has a song called Grow).

His homage to small-town life, irresistible humor and relatability make him a star. After this show I just have to tell Gray, from one small-town kid to another, thank you.