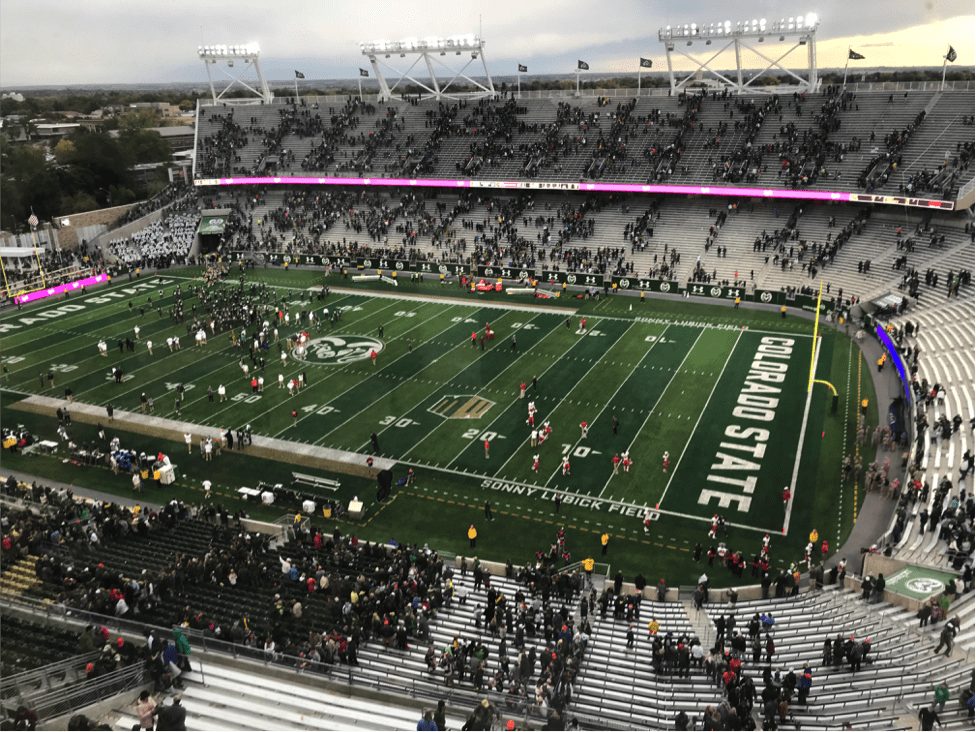 Colorado State starts off every game with a bang. The memorable shot of the cannon, to signify the game started.

The Rams had two bangs to start the game against UNLV; Anthony Hawkins returned the opening kickoff 99 yards for a touchdown, the longest return touchdown ever by CSU at Canvas Stadium. This set the tone early as CSU came out and defensively shut down UNLV on their first drive, ending it with an emphatic first career sack by Logan Stewart.

The offense was plenty inspired as well. Their first drive went quickly, capped off by an 18-yard McElroy rushing touchdown. With nearly 11 minutes still to play in the first quarter, the Rams led 14-0.

After the hot start, the Rams certainly cooled off offensively but continued to suffocate UNLV defensively. At the end of the first quarter, the offense put points up again via a Jaylen Thomas 11-yard touchdown run, following a beautiful 4th and 13 conversion by Warren Jackson and Patrick O’Brien.

A slow and methodical start to the second quarter led to a 50-yard Cayden Camper field goal. At this point it had become clear UNLV couldn’t help themselves out. Penalties, sloppy tackles and poor containment were the highlights of the defense up to this point and the Rams had every ounce of momentum in Canvas Stadium. The rest of this quarter went much the same way the bulk of the first quarter went, stalemate to stalemate, punctuated by CSU’s defensive dominance.

Coming back from halftime, UNLV had quite a hill to climb. They received the kickoff and were able to get to the 14-yard-line before being forced to kick a 37-yard field goal, which kicker Daniel Gutierrez made. UNLV was finally on the board, 24-3.

Colorado State got their turn with the ball and, unlike their previous drives, had big play. A huge completion to E.J. Scott for 41 yards brought the Rams onto the UNLV 19-yard line, but his celebration afterward drove the team back 15 yards. The next play, a chop block, brought the Rams back another 15-yards.

These were the sixth and seventh penalties of the game, bringing the Rams to 81 total yards lost on penalties. The offense continued to strike in spite of this, with a 19-yard pass to Warren Jackson and two quick rushes for 16 yards. Poor play calling ensued from the five-yard-line, forcing the Rams to kick a 23-yard field goal.

The Rams continued their trend of defensive dominance and offensively getting the job done, finishing the third quarter 27-3. Into the fourth quarter, Colorado State drove down the field once again and for the third red-zone trip in a row, was forced to settle with a field goal, this time a 24-yarder.

UNLV responded with its first touchdown. A long drive ending with a 14-yard touchdown strike to Randall Grimes. The Rams nearly had a turnover, but after it was overturned, the defense looked almost bummed out for a few plays. They did return to the intensity the had earlier, but it was too late and they had allowed their first touchdown to the UNLV offense of the game.

The Rams’ offense must have needed some inspiration, and seeing UNLV score did the trick. Their next drive ended in their third rushing touchdown of the game, this time a five-yarder by Christian Hunter.

UNLV suddenly found their groove. Though it was too late, they were playing for pride. A good drive fizzled out to a fourth and eight. A timeout was taken, as the Rebels planned their fourth-down attempt. They converted a 15-yard lob to Darren Woods Jr. for a touchdown.

CSU’s crowd of about 20-25,000 had dissipated by about half at this point, with just under two minutes to go. Though the game was in the bag, haunted memories of the team’s inability to play four solid quarters came pounding back to Ram fans.

The Rams were able to run out the clock and take the game by a score of 37-17. This came as quite a shock, as Colorado State has struggled defensively and has had difficulty closing games this year. The 20-point margin was an exclamation-point for the squad, as they were only favored by a spread of seven points.

Their next matchup is Nov. 16, a home game against Air Force. Be sure to tune in three hours before kickoff to the KCSU Pregame Show, presented by Old Aggie Superior Lager, for your chance to win a prize package including tickets to the game, swag and New Belgium Porch Passes.