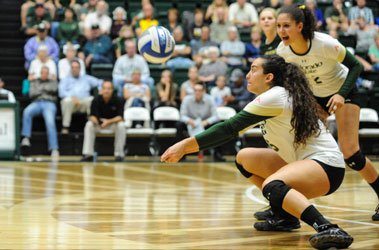 For Colorado State University women’s volleyball Thursday marked the start of a two-game road trip starting at Boise St. Coming into the road trip at 16-1 (6-0) the Rams looked to continue a 15 game winning streak.

Normally for the Rams, most matches only last three sets, but Boise St. came to play and made a comeback in the fourth set to push the set into overtime in which the Rams took a 15-8 win in the final fifth set.

The CSU women’s volleyball team improved to 18-1 (8-0) with a quick three-set sweep of the Aggies of Utah State. Though the Aggies came into this contest with a 2-17 record, playing on the road is no easy task. This match marked the Rams 17 consecutive victory and their 12 three-set win of the season.

Winning the three sets 25-11, 25-13, and 25-16, Colorado State took a commanding lead early in every set and never showed a slight sign of letting up. The Rams were helped out by 12 service aces, including four from redshirt junior Breana Runnels.

The 14 ranked Rams were led by the duo of Paulina Hougaard-Jensen and Breana Runnels who combined for 21 kills upfront. As a team, the Rams dominated the net all night, finishing with a .397 hitting percentage as well as 15 blocks. Katie Oleksak continued her dominating play from the setter position, finishing the contest with 17 assists in just two sets.

The Rams are back home this Thursday when the San Jose State Spartans come to Moby Arena. The Spartans are 7-13 (2-6) and are coming off of a conference win over New Mexico. First serve is at 7 p.m. local time. For live coverage of the game be sure to tune in to 90.5 KCSU FM.