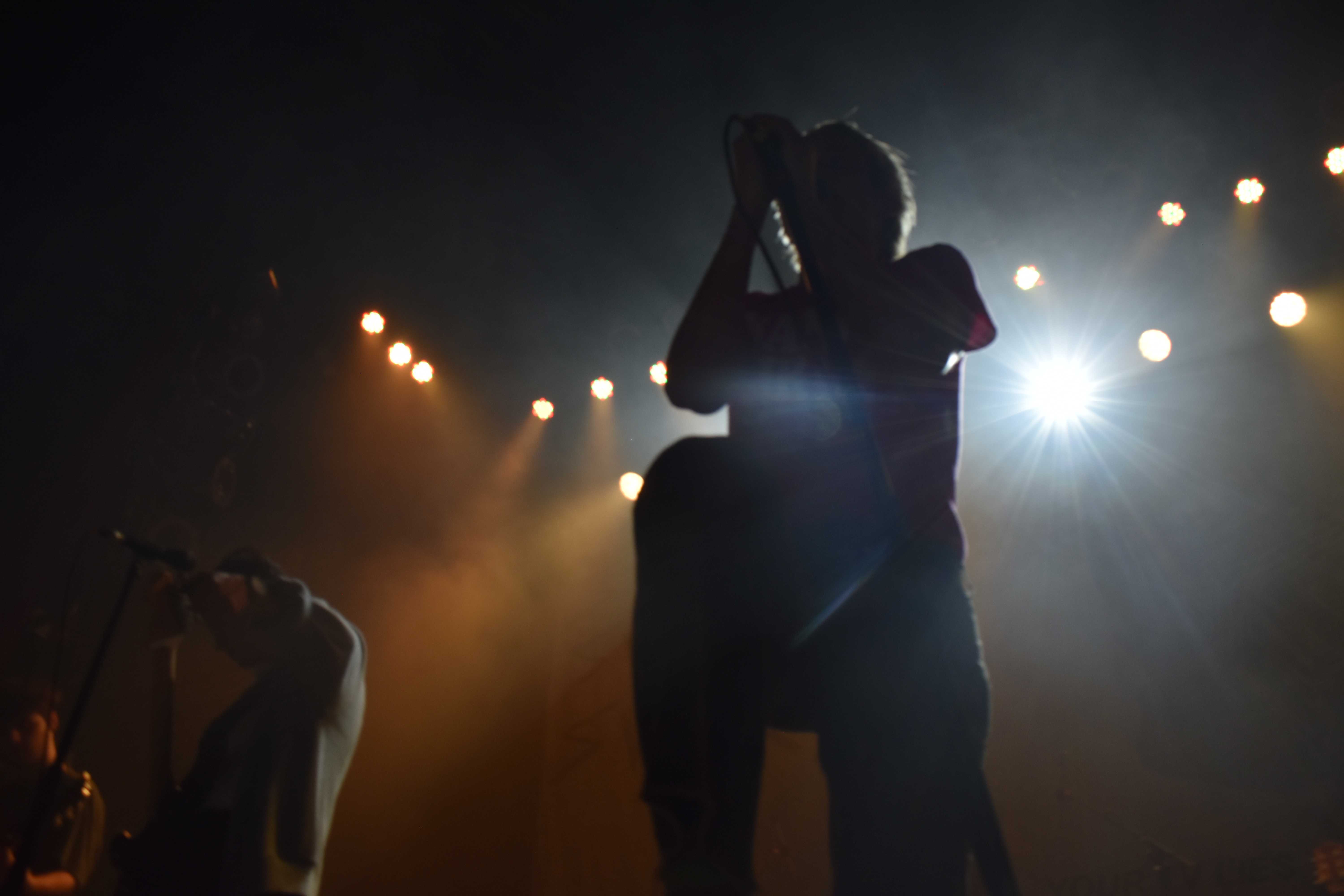 Wet! Hot! Tight! I’m talking about the SWMRS concert at the Gothic Theater on Thursday following the release of their newest album, Berkley’s On Fire.

The show itself featured a venue packed full of flying appendages, eyeliner, glitter, patched jackets, rainbow-colored Mohawks, moshing and crowd surfing, alongside an ever-present positivity through unity in the surf rock community.

Openers
The openers for the show were Destroy Boys and the Beach Goons.

[learn_more caption=”Who is Destroy Boys”] Destroy Boys is an all-girl punk group from Sacramento, California. They were strongly reminiscent of the riot grrrl feminist movement that started in the early 1990s. Their entire vibe was as if Blondie, Joan Jett, The Misfits, Bad Brains, Bikini Kill, FIDLAR and Mom Jeans decided to collaborate on a single project together.[/learn_more]

They came here to rock, and that’s exactly what they did. They warmed up the audience by starting an all-female mosh pit and screaming. The highlight was when Destroy Boys covered Nirvana’s “Territorial Pissings.” The combination of the lead singers raspy voice with the strong lyrics and chord progression made that song the most memorable for me.

[learn_more caption=”Who is Beach Goons”] Beach Goons is also a California based band from San Diego and are a Mexican-American rock group, with a lot of their songs bounce back and forth between English and Spanish.[/learn_more]

Beach Goons were way goofier. The bassist came out in a pink cowboy hat and yelled “Who’s ready to “f***ing rock?!” before hyping up the crowd with a strong yet nostalgic combination of sad boy, shoegaze, and psychedelic rock.

They opened with “Choker” causing chaos to ensue quickly. Bodies were slamming into each other and a kind of human tornado formed in the middle of the floor. It was a chill-hype experience where you wanted to dance and thrash but also sway in time to the music. “A.M.”, “Tar”, and “Miedo” were all really good dance songs that fluctuated between crazy jumping fits and chill arm waving moments.

SWMRS
[learn_more caption=”Who is SWMRS”] SWMRS is also a California based band from Los Angeles and just happens to have Billie Joe Armstrong (from Green Day)’s son, Joey Armstrong, on the drums. They are currently signed under Fueled by Ramen, a record label notorious of also signing alternative musical acts like Panic! At The Disco, Fallout Boy, The Front Bottoms and Twenty One Pilots to name a few. [/learn_more]

SWMRS came out in complete darkness and proceeded to tear apart the stage as soon as the lights came on. They opened with “Trashbag Baby” where all the lights came on. If you looked around you could see the fans eye makeup running down their faces with tears of happiness.

The lead singer, Cole Becker, came out in a “Kansas Girl” shirt with bright red eye makeup, matted hair, white Nikes and khakis; a true fashion statement. This outfit combines with his thrashing spastic movements on stage; bouncing between putting on a show, standing as close to the edge of the stage as he could get, and jumping on top of speakers. He was definitely the center of attention and you could not take your eyes off of him if you tried.

In reaction to the craziness happening Becker made a statement in between songs that if anyone was inappropriately touched at any point while crowd surfing, they would “kick that predatory mother f***er out.”

This was the first of Becker’s inspirational speeches between songs where he would promote messages of acceptance through lenses of Black Lives Matter, Feminism, Gay Rights, Transgender Acceptance, Keeping Families Together, alongside other controversial political topics. He also started a pile on stage where all the lost phones, keys, and other items lost due to crowd surfing were able to be found and returned to their owners.

SWMRS knew how to read the crowd. They knew when to go hard with the bass and when to pull back with the softer songs. They also would, as the chorus was about to drop, stop the music, leaving the audience confused but in suspense until the drop finally happened. The crowd lost their minds every time.

Highlights
The show stopped and the audience sang a heartfelt rendition of “Miley” word for word, belting out as loud as they could sing. This was rivaled by their execution of “Lose It,” where everyone took out flashlights on their phones and swayed in time to the music. SWMRS also covered “My Boy,” by Billie Eilish as a rock heavy ballad, which sounded shocking like a Kurt Cobain song.

My top highlight, of course, was crowd surfing. I was with a friend who asked me if I wanted to try it. I said yes, she grabbed the attention of her neighbor and in a matter of moments I was up in the air. I was almost dropped once, but I was caught and pushed to the front of the crowd. In the air, I made solid eye contact with Becker, who smiled mid-song and nodded at me.
It’s a fond memory I will treasure for the rest of my punk rock life.