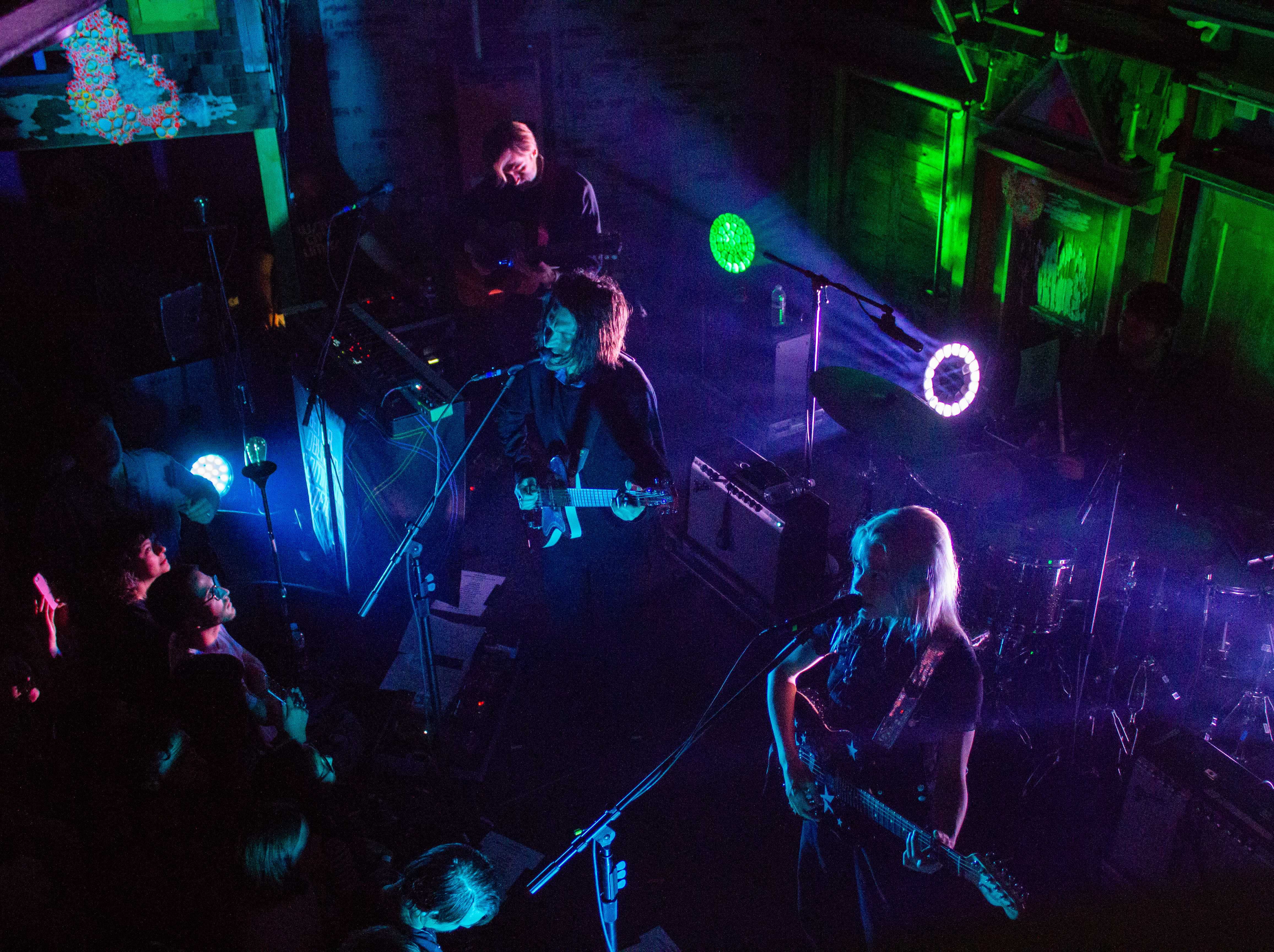 Better Oblivion Community Center blew away high expectations as they hit Meow Wolf last Friday as part of their sold-out US tour.

Meow Wolf, located in Santa Fe, New Mexico, is a very unique venue which doubles as a museum full of psychedelic and interesting exhibits during the day.

Who is Better Oblivion Community Center?

[learn_more caption=”Who is Better Oblivion Community Center?”] Better Oblivion Community Center, Phoebe Bridgers and Conor Oberst, released a joint album in late January. They started working on the album after Oberst heard Bridgers perform in Los Angeles the summer of 2016. Work started on the album before Bridgers released her debut album, Stranger in the Alps, in 2017, and was recorded around the same time as Bridgers’ other collaboration with Julien Baker and Lucy Dacus, also known as boygenius.[/learn_more]

How was the show?

Christian Lee Hutson cannot be judged primarily off of his sad guitar music. Hutson has a sardonic sense of humor, shown by his breaks in between songs.

“This is a rock n’ roll song, just like the rest of these songs,” Hutson said while introducing a song. “If you can open up the pit, this is a good one for [moshing].”

Hutson then continued to play a beautifully morose song called “Carol,” which was not so good for moshing.

He loved interacting with the audience, even jokingly asking them for a cover to play.

The best moment of the set was when he invited Lala Lala onstage to perform a song with him. The makeshift band went through a few different name ideas, one favorite being Misery Twins.

“Christian and I are of the same sadness,” said Lillie West, lead singer of Lala Lala.

Ultimately, they settled on the name Slugs.

This was a combination of artists I would not expect to mesh well, but they had real chemistry together onstage, as well as the fact that West and Hutson’s voices melded together perfectly to form a cohesive band.

West formed her band Lala Lala a few years back, and has released two studio albums, including their most recent release from 2018, The Lamb.

Honestly, the band’s energy seemed to be lacking and I don’t think Lala Lala was the best opener for Better Oblivion Community Center.

Their genre and general sound contrasted too much with both the first opener and the headliner.

Despite their lack of energy, West still had her classic sense of humor. saying

“I can’t look at Christian when we sing together because I always accidentally wink,” West said.

Perhaps Lala Lala was a bit overwhelmed by the venue and tired that night, but I do know they can offer so much more.

Better Oblivion Community Center was better live than recorded. Conor Oberst and Phoebe Bridgers have dynamic energy which draws the audience into each and every song.

“Exception to the Rule”, a more synth pop-heavy song, contrasted heavily with the rest of the album. During this song, Oberst stood on the drum kit singing, while Bridgers sat down on the floor below him and threw out large beach balls into the audience. The beach balls kept finding themselves back onstage, and Bridgers just accepted it, taking one and hugging it close to her while singing.

Along with performing all the songs off their album together, they also performed songs from each other’s albums and cover songs. A few highlights were their duet of “Would You Rather” off of Bridger’s debut album, as well as a cover done by Bridgers of “Easy/Lucky/Free” by Bright Eyes, and a cover of “Can’t Hardly Wait” by The Replacements.

Although, the best cover by far was when Oberst did a nearly unrecognizable punk cover of Bridger’s sad, slow song, “Funeral”.

There was a common thread of humor throughout all three acts, with Bridgers calling Oberst out at one point.

“Conor was late starting that song because he was taking a Juul hit,” Bridgers said.

Alongside all their other music, they also revealed a new song called “Little Trouble”, which hopefully means they will be collaborating more in the future.