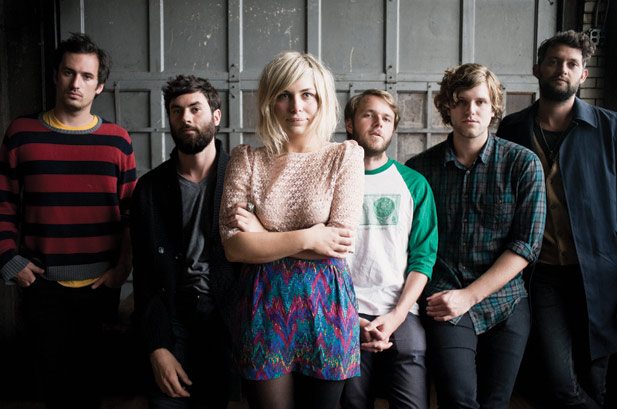 On August 26th, 2016, RamFest 2016 kicked off the fall semester for the Colorado State campus with a huge concert paired with local food trucks and plenty of beautiful, evening weather. Rising stars Coleman Hell and R. City opened for The Head and The Heart (THATH), ahead of THATH’s old-out show at Red Rocks on August 28th. Tyler Williams, drummer for THATH, called into KCSU-FM for an exclusive interview, featured below.

Formed out of mic nights at Conor Byrne Pub in Seattle, The Head and The Heart have found themselves in the national spotlight after releasing their first, eponymous album in 2010. Ever since, the band has had a markedly slow-and-steady growth in recognition and popularity. Now they are regularly recognized as one of the biggest acts in Indie Folk.

But, let’s be very clear. The band, itself, sees fame more akin to some unnatural, but necessary development in their lives. Focus, instead, is put on their craft and their maturity as artists. They took a brief hiatus after their second album, Let’s Be Still¸ and their sound has since been transformed.

This journey for the band and, more to the point, for their drummer Tyler Williams took center stage for my interview with him ahead of RamFest 2016.

Laurelle (LT):  Alright. I want to start at the very beginning. I remember reading a few years ago from another interview that you did that you credit a lot of your career, as a drummer, to your sixth grade music teacher. Can you talk about that?

Tyler Williams (TW): Yeah! Ms. Randal! She kind of pushed me to be more dynamic and to be a more conscientious musician in relationship with other instruments. So she was kind of like the first real teacher that I had who I felt was taking an interest in the things that I cared about.

LT: Yeah, I remember when I first read that. It was so much deeper than I would have expected. You wanted to be a saxophone player, right?

TW: Well, not really. I just thought it was cool and I tried it out. She was like, “You’re definitely not going to do that.” She put the kibosh on that quickly.

LT: So The Head and The Heart (THATH) is six years old now and you guys started in Seattle, allegedly in a pub. And now you’re two days away from headlining a sold-out show at Red Rocks. You’re here at CSU today and you dropped a few singles from your third album. One of them is already doing pretty well. So, how does it feel to look back on the younger you? Now that you’re on the other side of fame and you’re here?

TW: That’s a good question! It’s kind of…interesting. Because it feels very organic. It feels like nothing has been a giant leap. So, we’ve had time to adjust and grow into this situation, into who we are now. And everything we’ve always done has always been like an outward manifestation of who we are as people on the inside.

So, everything that we do just feels honest. You know, it’s always just what we’ve done. I would say the thing that’s changed the most from those days is just our relationships. We don’t fight as much. We obviously get frustrated, but not like we used to be where we were, you know, always on top of each other.

LT: It’s cool to hear that. I wanted to ask that question, because it has seemed like your growth in popularity has been organic. That’s the perfect word for it. And that connects to another question that I have. Which is: the first album, The Head and The Heart, has this amazing, timeless, Americana sound to it. It fits well into the soulful grit associated with a lot of Indie Folk. And I think the same goes for Let’s Be Still. But it sounds, already, like there’s a bit of a change in that sound for Signs of Light. And I was wondering if you could talk a little bit about that? I know there was a hiatus in between the last two albums.

TW: Yeah. We’ve all just done our own things. We took the time off to go our separate ways. We all did different things and were influenced by different music. And I think we were also limited on the first two records by our level of musicianship, you know? We weren’t as good as we are now. We were not as mature with our writing, or whatever it may be.

And also as you make records, you find more tricks, more abilities that come to light when you’re in the studio and when you’re on stage.  So I think all those factors were put together. It was the music we were listening to, the situations that we lived, the time off, and like six or seven years of experience. So I would hope that it would sound different.

LT: Now, you travelled back to Richmond, back in 2014 during that hiatus. You went back to explore the music scene in that area?

TW: Yeah, actually, I kind of started a psych rock side project. And we actually made two records in that time. You know, just trying to stay busy and stay creative. Learning, really. And then I also started managing a girl from Richmond, Lucy Dacus, who just signed to Matador Records. Yeah, it’s good to be home sometimes.

LT: Ok, so back to the Signs of Light Tour. And, really, any other tours THATH has done. Do you have a favorite venue to play?

TW: That is a tough question. I mean, Red Rocks is obviously up there. We played there two years ago, headlining and then we also opened for The Shins in 2012. So, we’re kind of experienced with it, but it’s definitely been such a unique, interesting vibe there.

TW: Yeah. I really also liked The Greek in Berkeley. That place, it just feels like you’re in Roman Times. But, yeah, I think those two would definitely be up there for me.

LT: So. The band has been around for about six years. Where do you hope to see the band six years from now?

TW:  Oh man. You know, it’s funny. We’ve just been taking everything day-by-day with shows and promotions. So it’s hard to think into the future as we’re putting out another record. But, I hope that we can still be relevant and be making music at this level. And just keep growing. I think for us, it’s inevitable that we’ll keep growing and change our music over time. I think that’s just who we are as people. We can’t stay the same.

LT: So of all the tracks that you’ve put out, do you have a favorite?

TW: I am going to pick one from each album. I would say that “Down In The Valley” from the first record is, far and away, one of my favorites. And “Another Story” is my favorite off of Let’s Be Still. And then there’s a song off the new record called “Dreamer” that’s probably my favorite song that we’ve ever written.

I think it’s the most unique song we’ve written. And I don’t know…I think it’s timeless and classic, but in a different way than you might have described the first record. But it also feels unique to who we are. It doesn’t seem like anything that anyone is doing now, which is cool.

LT: Ok. Last question. If you could pick any musician to jam with, alive or dead, you can even pick two if you need to…who would you pick?

TW: Oh man. I would have to go with Keith Moon. He’s a maniac on drums and I feel like it would be ridiculous to get on stage with him and watch some explosives go off. And then, like, just wreck a Rolls Royce into a pool. That would be the night for me.

LT: Isn’t that everyone’s dream, though?

After the interview, one of the KCSU-FM Music Directors, Mimi Hibben, a team from The Rocky Mountain Collegian, and myself had the pleasure of covering RamFest 2016 from a special, backstage view. From the classic Cam the Ram moments to Corndoggies, Ba-NOM-a-NOM, The Silver Seed, and Austin Taco; from the electrifying opening of Coleman Hell and R.City to the ethereal show-stopper performance from The Head and The Heart, it is safe to say that RamFest 2016 was one of the best yet.