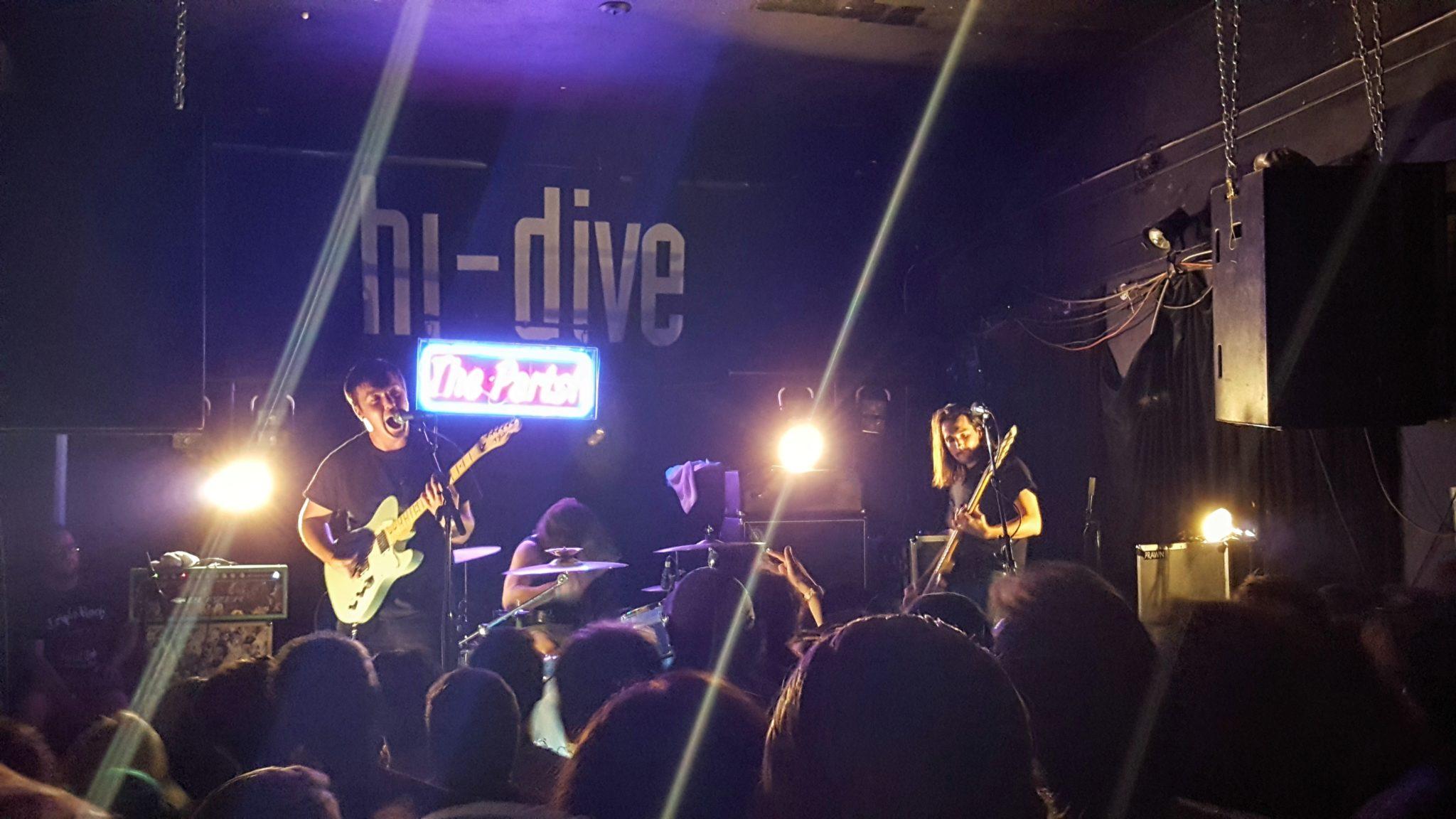 Math rock, Screamo, Emo, and even Twinkly Emo are all genres that have been used to describe Tiny Moving Parts. This three-piece family band out of Benson, Minnesota stands out in all of these scenes because they fall under all of them and even more. Versatile, fast-paced hammering combined with lead singer Dylan Mattheisen’s almost Tom Delonge inspired writhing vocals gives the band a unique sound that isn’t present anywhere else. Along with brothers Bill and Matt Chevalier on drums and bass/vocals, respectively, the band feeds an energy that seems lacking in the alternative music scene. They’re just a trio of insanely happy guys. I can say with confidence this was one of the most pleasurable interviews I have conducted with a band. Tiny Moving Parts’ new album Celebrate is out now on Triple Crown Records.

You guys are from Minnesota, how did you come out of a midwest state where the closest town is a couple hours away and then the next town is even farther?

Dylan: There’s pros and cons about living in the middle of Minnesota. We’re from a really small town in Minnesota and we knew that if we wanted to tour and stuff we just had to do it. So we just booked our own tours and started from scratch.

Matt: It was harder to get into DIY, being out in the middle of nowhere you didn’t have as many connections. You just had to hope that eventually you would get a good basement show and then once you get one good one you start meeting all the friends in the DIY scene.

So for your first tour did you just stay around the Midwest?

Bill: Some bad bar shows. Every now and then you get a sweet DIY show and that’s about it.

Do you still wish you could experience playing smaller bars where no one had heard of you before?

Matt: Everything has pros and cons, I guess.

Dylan: As long as the energy is there and you have the right vibe and everybody’s actually giving a shit and you have a good connection with people. That’s all that matters. And we get some of the same vibes from packed house shows to venues like this where it’s a little bit bigger. As long as the vibe’s right, everything’s cool.

There isn’t a big scene in the midwest for bands that play emo/screamo/math rock like you guys. How did you guys get into that type of music? Was it more influenced by your friends or did you just find some things on the internet?

Bill: It was MTV and Fuse and stuff. It went from blink-182 and alt stuff like that to mewithoutYou and Thursday and stuff like that. I think Fall of Troy… that we got into because Dylan heard one of their songs on a video game or something.

Dylan: Yeah! I was just thinking, “This is really fast guitar. This is so cool.” One thing led to another. The internet helped too.

Bill: Once Myspace became a thing. Myspace was cool.

Dylan, you got to work with Max Bemis on Say Anything’s last record. How was that?

Dylan: It was great. Max was an awesome dude. I was kind of nervous at first on my flight to Tyler, Texas and he’s influenced so many bands. We’ve always dug Say Anything growing up too. But yeah, like I said, I was kind of nervous because I didn’t want to screw it up because I had one day to record guitar and do stuff. I was just making it up as we went along in the studio. I was just hoping I wasn’t going to screw it up. But it turned out perfect. He was a great dude to work with. Super easy going and easy to talk to and we had a lot of fun.

Did you guys go to college?

Dylan: We actually all went to college. Billy and I went up by Fargo, North Dakota and Matt was an hour and a half away, or something like that. He’d come up on weekends and stuff. So Fargo’s kind of like our second home. It was fun. Billy and I had a college house together and we got evicted because we had too many college parties. There’s not many crimes that happen up there, so once that was a thing it was on a bunch of the local news stations and we were on TV and stuff. It was a college party bust. Nobody died or anything crazy but it was pretty memorable and it’s always funny to think about.

If you could tour with any band, which band would it be? Dead or alive.

Matt: One of the answers would be Fall of Troy and we’re doing that in Europe so that will be tight. Maybe At The Drive-In, that would be cool.

Dylan: Tegan and Sara but I don’t think that would make any sense. That would just be for selfish reasons to see them live every night.

You guys have the most enthusiastic and happy personality all the time. How do you keep that going?

Dylan: I don’t know, touring and everything…

Do you ever get burnt out on tour?

Matt: You just sleep through it if you get too tired.

Dylan: Yeah! Sleep or drink through it.

Bill: Burnt out as in tired. Not really sick of the road or anything.

Matt: If you’re getting a little sick of something then just make sure you get a good night’s rest. You’ll wake up and feel fine the next day.

Dylan: You’ll feel like a million bucks. Yeah, cause we’re more than a month into this tour. We only have 4 shows left and we’re already dreading going back home. We don’t want to go back home.

Matt: This tour’s been a lot of fun.

Is there any food that you look forward to when you get back home instead of just eating fast food on the road?

Bill: My dad grills good burgers, so I look forward to that.

Matt: I mean, I’m excited because my body works a little bit better when I get home and I start eating real food. So it’s not like I’m excited. I’m more excited for my body not craving anything.

You guys made a crazy video for “Headache”. How did that idea come about and get funded?

Dylan: Triple Crown helped us out with the funding. Part of our deal was that we wanted to do a lot of music videos and we had talked about that beforehand. So once we released this record we knew we wanted to do a video for that song and we met up with Kyle Thrash. He’s done our previous videos for “Always Focused” and he’s done some Modern Baseball stuff too. He’s a good friend of ours and we knew we wanted to go with him. He kind of came up with the idea of: In 24 hours, what would you guys do? We all agreed we wanted to do a fun video that was visually awesome and overall just a great time. We made a list of 50 different things to do and had to get it down to 16 or something. The first thing we did was the skydiving and that was fucking awesome.

Did you do it all within one day?

Dylan: It was done in three days. It was a lot of work.

Bill: Skydiving was the first thing we did.

Were you in a moving truck when you filmed it?

Bill: We were just in the truck. It wasn’t actually moving. But, you don’t really notice in the video because all the camerawork is moving, they had people on the sides of the truck shaking it the whole time to make it seem like it was driving.

If you had the opportunity to do that, would you put on helmets and pads to play in a moving truck?

Bill: I would have been down to do it without the pads. I think that sounds fun. As long as the driver wasn’t out to kill us.

Which part of it was your favorite to film?

All: (In unison) Skydiving.

Bill: A lot of the other stuff was kind of brutal and miserable. Like running into the ocean naked when it was 35 degrees out.

Matt: The hot pepper was awful.

Bill: The skittles was actually one of the worst because they were frozen. It was so cold they froze.

Matt: They were just in the trunk… It was all filmed in February and it was 30-something degrees out.

Where did you film it at?

How was the dollar menu?

Bill: The hard part was the apple turnovers. We don’t like those.

Matt: It was gross they have apples in them.

Dylan: It’s too healthy for us. (Laughs)

What is your favorite Teenage Mutant Ninja Turtle?

Dylan: Oh shit. I guess we don’t know them that well. Michelangelo.

Bill: I wanted the red bandana, one. Rapheal.

Matt: I’d probably go Leonardo. I just like red or blue. It was more boyish when you were little. Those were my two favorites when I was a kid.

Do you have any advice to aspiring artists?

Dylan: Just have fun and do it.

Dylan: Don’t worry about other bands. Just have a good time.